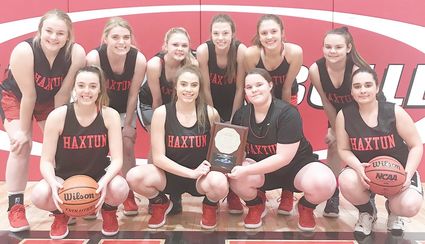 The Haxtun Lady Bulldogs like to keep fans on the edge of their seats and that's exactly what happened in District basketball action in Wray over the weekend. After defeating Arickaree/Woodlin in the first round Tuesday night, Haxtun advanced to the second round in Wray where they picked up a one-point win on Friday to advance to the Championship the following day and keep their season alive for one more week. The Championship game against Lone Star was just as close as the Lady Bulldogs fell by just two in the final seconds of action. Despite a championship match loss, the team is set to compete at Regionals later this week.

Haxtun's District match ups began on Tuesday as they hit the road to Lone Star to face off with Arickaree/Woodlin, a game that was set to originally take place in Idalia but changed locations due to snowy weather. The Lady Bulldogs entered the tournament as the number three seed. From the get-go, Haxtun dominated the Lady Indians, earning a 10-point advantage after the first quarter. The Lady Bulldogs added another 15 to the board before half time to hold onto a 15-point lead at the mid-way mark. Haxtun never let up and kept the offensive pressure up to keep their season alive and to advance to the next round as the Lady Bulldogs added 13 points in the third and 10 in the fourth for a final 54-27 first round District win.

Three Lady Bulldogs hit double-digit scoring figures Tuesday night in Lone Star including senior Brooklyn Davis with 17, junior Bella Tori with 13 and sophomore Taylor Schram with 10. Davis connected with three three-point shots and four two-point shots; Tori made five baskets under the hoop and sank three of four free-throws for 75 percent on the night; Schram made her points off two three-point shots and two inside the paint.

Sophomore Allie Thompson, Davis and Tori all led their team in rebounds with six each. Thompson pulled down three on offense and three on defense; Davis and Tori each brought down two offensive and four defensive boards.

Schram led in steals with six for the night while also adding seven assists. Davis and Tori each tallied four steals.

"This was a great week of District Basketball for the Lady Bulldogs," Head Coach Arlan Scholl said Monday.  "The girls came out ready to play on Tuesday against Arickaree/Woodlin and came up with a strong win that allowed us to continue on playing in the District Tournament at Wray."

The win over Arickaree/Woodlin pitted Haxtun in a match up with the number one seeded Idalia Lady Wolves on Friday night in Wray. The Lady Bulldogs found themselves down by two after the first quarter and an even showing by both teams in the second left the score 15-13 at the half. The Lady Bulldogs took the lead throughout the third as they put up 10 points while holding the Lady Wolves to just five. A late run by Idalia in the fourth quarter made things interesting and kept the fans on edge and as the final seconds ticked away, Schram sunk a shot from behind the three-point line to send the Lady Bulldogs up by one and into the District Championship match up with a one-point, 34-33 win over Idalia.

In knocking off the number one seeded team, Schram led her team with 12 points for the night with six points from three-pointers and six from two-point field goals. Sophomore K'Lyn Bornhoft, Davis and Thompson each added six points in the contest.

Davis again led her team in rebounds, this time pulling down seven; one offensive and six defensive. Bornhoft tallied five rebounds followed by Tori with three. Davis also led in assists with four followed by Bornhoft, Schram and Thompson, each with two. Schram and Davis each tallied two steals.

"The Friday night game against Idalia was hard fought and we did a great job of defense on their best player," Scholl noted. "This allowed us to build a lead toward the end of the game.  Some unforced turnovers that led to some Idalia points made the game a close one at the end.  A last second three-point basket by Taylor Schram put us on top on the scoreboard by one-point and assured us a trip to Denver to play at Regionals on Friday."

Haxtun found themselves down by four after the intial quarter with the top ranked Lone Star Lady Longhorns. The team had a slow second, scoring just to points, trailing 17-8 at half time. The Lady Bulldogs narrowed in on the gap throughout the third, holding Lone Star to four points while putting up eight. Haxtun battled in the fourth, and with just six second left trailed by just one. After forced fouls in attempt to get the ball back, the final buzzer sound with the Lady Longhorns on top by two.

Tori led her team with 11 points in the outing against Lone Star. The starting junior connected with five shots under the basket and nailed one of two free throws. Davis added seven points for the Lady Bulldogs followed by Bornhoft with five.

"Next up was the 18-1, number one seed Lone Star team ... We changed our game plan on Saturday night and the girls executed the plan well," said Scholl.  "We generally are a pressing team, but after watching Lone Star on Friday night I knew that we just needed to get back and play the solid defense that I knew we were capable of.  The girls played outstanding team defense.  I generally don't quote names of players that did a great job, but I have to salute Allie Thompson for her great defense on Lone Star's tall post player.  She held her to one field goal, which was huge in our effort to be competitive with them.  We got down early in the game, but the no-quit attitude of these girls brought us back and gave us a chance with the last possession to tie or win the game."

The runner-up finish at Districts gives the Lady Bulldogs a spot in Region 2 playoff action at Englewood High School on Friday, March 6. 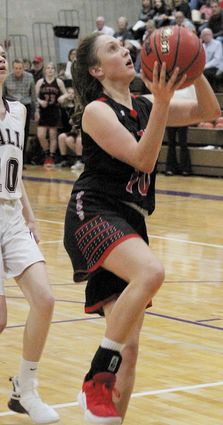 The team is slated to face off with the Merino Lady Rams for the third time this season. The two teams met in early December when the Lady Rams earned an 18-point win, but most recently, the two teams faced off for a second time where the Rams walked away with only a seven-point victory. Game time at Englewood High School on Friday is set for 3:30 p.m.

The winner of the Haxtun and Merino contest will advance to play the following day and face off with Briggsdale, who earned a first-round bye in Regional action. That match is slated for Saturday, March 7 at 4:30 p.m., also at Englewood High School.

The winner of each regional event will punch a ticket to the 1A State Tournament the following week.

"I am so excited for these girls and their work that allowed them to bring the District Runner-Up plaque home and earning a trip to Regionals.  We look forward to being competitive at Regionals in Denver this week," Scholl added.