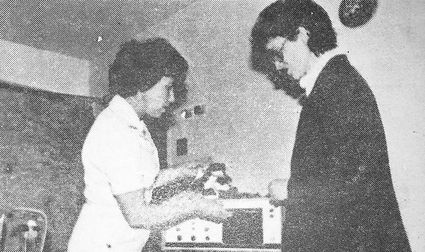 HAXTUN RN Vickie Hadeen explains the use of the fetal heart monitor to Ann Yost, respresenting the Haxtun Jaycee-ettes. The Jaycee-ettes and the Heginbotham Trust donated money to purchase several pieces of equipment for the Haxtun Hospital.

Haxtun's town basketball team hope's to maintain its long string of victories again next week when it will meet the Holyoke team on the Haxtun floor. The locals defeated the Fairfield All-Stars last Friday, 40-21. Williams and Scarborough tied for soring honors. Other Haxtun players were Birrell, Davis and Baker. The line-up for Fairfield included M. Lydin, B. Ruch, Anderson, I. Knode, K. Knode, C. Ruch, Gordon and Garretson.

James K. Hackett, farmer living south of Haxtun, passed away quietly Sunday evening at a hospital in Haxtun. The deceased was 62 years of age. Complications of influenza developed the latter part of the week. He was born in Paisley, Scotland. He was married in the old country and came to America with his family about 20 years ago.

Warm spring weather was resumed in the Haxtun territory this week following storms of a varied nature. Trailing two dust storms last week, a blizzard arrived Saturday night with temperatures below zero mark. The dust storm last Thursday, which was said to be the most severe in many years, was experienced in six sat3s. The existing wheat crop shows little prospect at the resent time due to a lack of moisture and the ravages of jackrabbits.

The resignation of Kenneth Fetzer, who has been a board member for seven years, was accepted by the Haxtun Board of Education. Fezter has purchased the John Deere dealership in Akron and will be moving to that community soon. Bill Harris was appointed to the Board to replace Fetzer.

Michael David Gulley of Holyoke has been hired by the Haxtun Police Department and is now doing patrol duty in Haxtun.

Mrs. Richard Fryrear, Mrs. Alfred Renzelman, Mrs. John Gamble and Mrs. Galen Bamford earned certificates to teach the Laubach Literacy System. These ladies are members of the Education Committee for the Refugee family coming to Haxtun soon. They hope to teach English to the members of the family.

Little booklets, "How to Have A Good Day Every Day" by Norman Vincent Peale were presented by Mrs. Rice to all present at the United Methodist Women. They were giving to the ladies by Mrs. Ed Wiebers.

A blank sign was erected on Friday, Feb 25, at the eastern edge of Haxtun on Highway 6. If all goes as planned, letters spelling "Welcome to Haxtun, the small city with a big heart," should be on the sign as early as this week. When the sign is completed it will also carry painted images.

The Future Business Leaders of America held their District IV conference in Haxtun this year. School was let out for the day so students of District IV were able to use the entire school building.

Members of Snowball royalty take off their dancing shoes for a moment to pose for a picture. King Kyle McConnell and Queen Erin Ehrlich, Crystal Daniels, Ross Edwards, Matt Firme and Jody Sawyer. For all dances, royalty candidates are chosen by the student body. Juniors and seniors are eligible for this honor.

The Fleming Lady Wildcats took the Regional Championship game against the Otis Lady Bulldogs on Saturday, March 6. Fleming defeated Otis 49-32 in the game and earned their spots at the State Basketball Tournament scheduled for this weekend in Pueblo.