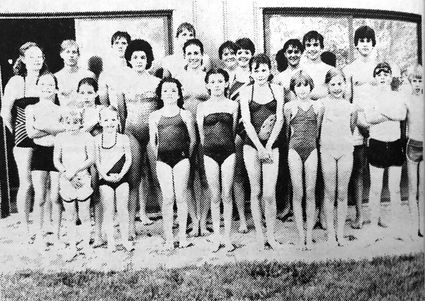 MEMBERS OF THE newly-begun Haxtun Intramural swim team take a moment out of their practice time to pose for a photograph. Steve Maroon is coaching the team, which hopes to have four intramural meets this summer.

A number of farewell parties and social gatherings have been held in Haxtun during the past week honoring the Rev. I. C. Snavely, pastor of the Church of the Brethren, and his family, who are leaving for the east.

They body of Lewein, 6, who lost his life Sunday evening, May 26, in the flood waters south of Haxtun, was recovering last Sunday morning, a week later, six miles west of the highway crossing. Mr. Lewein narrowly escaped the tragedy that overtook his wife and two children. His first wife, the sister of the late Mrs. Lewein, passed aw...