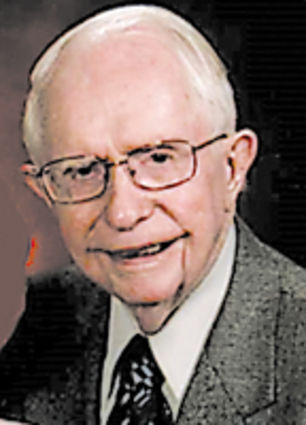 Eldon graduated from Sterling High School in 1940. He attended Peru State Teachers College from 1940 to February 1943. While at Peru State, Eldon was a member of the United States Army Air Corps Reserves.

He was called to active duty in February 1943 and served in the U.S. Army Air Corps from February 1943 through February 1946. He was assigned to the U.S. Air Corps Division in Florida. Prior to that deployment, that division was stationed in California under the command of General George Patton.

Following his honorable discharge, Eldon returned to Peru State Teachers College. He graduated from Peru State in May 1947.

He got a job teaching junior high and high school math and science classes at Syracuse, Neb., where he was also the head coach for football, basketball and track/baseball.

Eldon married Princetta Blakely at the Methodist Church in Harlan, Iowa, on June 17, 1951. That fall, they moved to Manson, Iowa, where Eldon worked as a classroom teacher and served as the high school principal for four years. Their two oldest children, Harold and Diane, were born when Eldon and Princetta lived in that community.

He was the high school principal at Pisgah, Iowa, where his youngest son, Don, was born.

Eldon became the superintendent at Haxtun. During his tenure, school district voters approved a bond issue for a new high school gymnasium.

Eldon served as superintendent at Haxtun for 20 years until his retirement, when he and Princetta moved to Fort Collins. They lived in a single-family home where they enjoyed tending rose bushes. They later moved to a patio home in the Peach Tree area. They eventually moved to The Winslow and then to New Mercer Commons.

He was an usher at First United Methodist Church in Fort Collins and served on several church committees.

Eldon and Princetta enjoyed attending Colorado State University football games. They also enjoyed attending performances at the Lincoln Center. For many years, they had a close group of friends who got together regularly to play cards, attend movies, go bowling and dine out.

Eldon and Princetta took several trips during retirement. They traveled twice to Europe, visiting Sweden, Norway, Denmark and St. Petersburg, Russia, on one trip, and touring Germany, France and the Netherlands on another trip.