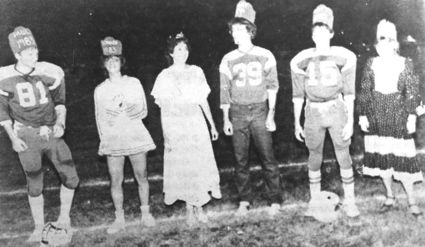 Daily News - Dr. Kinzie and Ira Kyger are in Wyoming at present enjoying a hunting trip.

Ford Community News - Mr. and Mrs. Hackett enjoyed a pleasant visit from Mr. and Mrs. C.L. Fisher of Fleming Sunday. Mrs. Fisher is an old friend of the family.

The showing of the farm products at the Haxtun Corn Festival Wednesday was the largest and most varied in the history of the Festival. The quality of products displayed showed consistent improvement over previous year.

The first few thousand trees in the biggest forestry project ever attempted, President Roosevelt's plains shelterbelt, have been planted. The intentios is to hand plant a zone 100 miles wide and 1,000 miles long extending from the Canadian border down through North Dakota, South Dakota, Nebraska, Kansas, Oklahoma, and into the Texas panhandle. The purpose of the shelterbelt is to serve as a windbreak and retard the sweep of the wind that as caused wind erosion and a general sapping of the moisture from the land.

Mrs. Grace Lapp, 45, years of age, passed away at a hospital in Haxtun, Monday morning, Sept 23, 1935. About two years ago she had a serious attack of pneumonia and never completely recovered from this illness.

The original Cornpickers from the 1930 Fleming Fall Festival were honored Saturday at the 50th anniversary of the event.

A truck operated by a Fleming man was destroyed when it overturned on U. S. 6 three miles west of Haxtun early Friday morning, according to the Colorado State Patrol. Richard, John Maddox, operating the truck was not injured.

Edwin Alexander and Velma Finnigsmier were united in marriage September 13, at the Church of the Brethren at 2 p.m. with the Rev. Roy Pfaltzgraff performing the double-ring ceremony.

Shelly Burton and John Anderson were speakers on Wednesday to the Haxtun High School General Business Class. The students showed slides and told of their experiences at the Co-op Youth Leadership Conference which they attended last summer in Liberty, Missouri. John explained the fundamentals of a cooperative as a form of business and the importance of cooperatives in our community.

The Fleming Senior Citizens are now enjoying their Meet and Eat at the school. On Tuesday Doug Price the director of N. E. Colorado Area Agency of Aging was there and after lunch, spoke to the group.

The Fleming First National Bank held an open house for its new drive up addition to the bank on Sunday. There were 350 registered for the affair from Fleming and many surrounding communities and one lady from Alaska. In the drawing the $100 savings account was won by Mrs. Clyde Saylor and the $50 savings by Jodi Loos.

Trees in Haxtun drooped with the heavy snow that fell throughout Saturday night and Sunday morning. While the snow was hard to measure because much of it melted as quickly as it fell, the moisture content measured 76 hundredths of an inch in town. Nearly all of the snow had melted by Sunday night, but residents awoke to find frozen vegetation on Monday morning.

The first Ken Kurtzer Walker mower obstacle course contest will be held on Sept. 30, during Haxtun's annual Corn Festival. The new contest is being held to memorialize Kurtzer, who died tragically on June 27 while trying to rescue his nephew who had fallen into a grain bin. He was well known for his philanthropy to the citizens of Haxtun.

Grace Gibson and Jack Bornhoft were crowned 2010 Little Mr. and Miss Corn Festival on Saturday afternoon. Grace hopes to grow up to be a cheerleader and Jack a police officer.