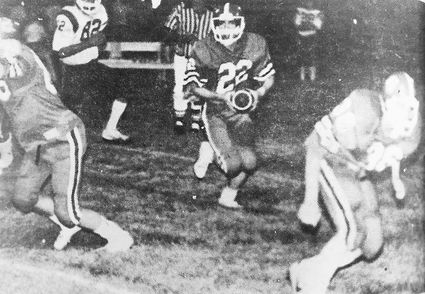 SOPHOMORE Jim Rifenbark got to see a lot of action in the second half as Haxtun belted Akron, 47-0, Friday.

Miss Luella Pope and Bernhard Burmester, both of this city, were married Sunday afternoon at two thirty o'clock. The Rev. Jos Hannewald officiated at the exchange of nuptial vows.

Sunrise News - Miss Nelson of the Sunrise school took the fifth, sixth, seventh and eighth grades to a lecture on Ireland Friday evening of last week at the Methodist Church in Haxtun.

The new bus line, operated by the Burlington Railroad, began its schedule through Haxtun Sunday evening. The line operating from Denver to McCook, Nebr., will run four busses daily, two in each direction. The fact that Highway No. 6 which passes through Haxtun, is an all-weather road and is greatly improved over the Goldenrod from Wray to Brush prompted the Burlington officials to change the bus route, it is believed. Bus fares are practically the same as train fares, the rate being two cents per mile. The fare to Denver is $3.05, although a round-trip ticket may be purchased for $5.50.

Gordon McIntyre of Haxtun and Miss Bernice Lee of Sterling were married Saturday afternoon at the home of the bride's parents, Mr. and Mrs. Fred Lee.

Sunflower oil is now replacing other types of oil in many of the fast food chains throughout the United States. The replicated tests are being conducted by Ag-Search and Colorado State University and are designed to evaluate the potential of the sunflower as a new crop for farmers in northeast Colorado. Bill Fuesz's 19-acre test plot was planted June 25 and consists of both oil and non-oil types of sunflower.

Fleming Mayor Ralph Deines signs a proclamation designating Friday, Oct. 3, as "American Enterprise Day." Several speakers will visit business classes at Fleming to explain the functions of cooperatives and corporations. A field trip is planned to the United Bank of Denver and Hewlett Packard of Loveland to visit business offices and talk to employees of these two firms.

It was the classic football coach's nightmare. With less that two minutes left in the game, the Haxtun Bulldogs were faced with a fourth down only two yards from the endzone. Trailing 7-6, should the Bulldogs try a field goal or go for the touchdown? Haxtun's head coach John Starkebaum chose the touchdown. He sent Haxtun running, Jay Hanyes straight ahead and the junior slammed through Holyoke's defense for the touchdown and the victory.

Fleming News - Mrs. Mamie West of Rose Arbor in Sterling spent Sunday at the Lee West home getting acquainted with her two newest great-grandchildren, Megan Marie and Jeffery Maxwell, who with their mother Mrs. Jay (Susan West) Maxwell and sister, Kelly, are visiting, the Wests this week, Mrs. Lee West had spent a part of the week in Fort Collins and brought the family home for a few days.

Janell Kinzie, Dave Kirk and Mr. and Mrs. Bill Hein all of Denver spent the weekend with Mr. and Mrs. Bud Kinzie visiting and attending the 90th anniversary of the Fleming United Methodist Church. They left for their homes on Monday.

Clarksville and Wages News - Mr. and Mrs. Larry Myers went camping at Yampa from Thursday through Sunday. Craig stayed with his grandparents, Mr. and Mrs. Vernon Myers in Yuma.

Frank Lett and Milton Hill worked at the Wages Church on Friday and Saturday refinishing the front doors. They had dinner at the Hill home both days.

Rockland News - Cindy Wisdom accompanied her parents Keith and Iola Hauschild to Goodland, Kansas where they attended a Hauschild reunion on Saturday returning to their homes on Sunday.

Diane Fryrear is surprised at a retirement ceremony in her honor on Wednesday, Sept. 29 at Haxtun Hospital District. Fryrear plans to retire in November but wants to return to HHD a few days a week to finish writing some disaster preparedness polices.

Volunteers from the Lamar and Alamosa welcome centers visited Haxtun for several hours on Thursday, Sept. 23 as part of a Familiarization Tour required by the Governor each year. The volunteers were treated to a lunch at the Daily Grind before Haxtun Chamber members gave the visitors a driving tour of Haxtun and took them for a walk around the Haxtun Park.

Two members of Haxtun High School's Class of 1940 reunited during the alumni meeting at HHS on Saturday, Sept. 25. The two in attendance were Curtis Starkebaum, of Littleton and Lorin Starkebaum, Haxtun.