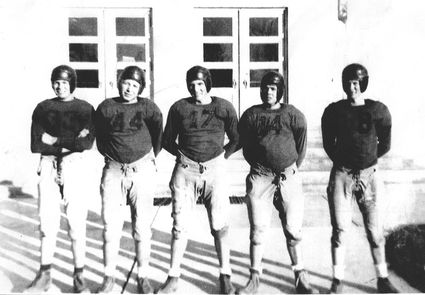 Mrs. Anna Gray, 74, passed away at her home in Haxtun early Sunday morning, Oct. 29, following an illness of several weeks duration. Death was caused from a heart condition. She immigrated to America at the age of 26, being preceded by her two brothers.

A special service was held Sunday morning, Oct. 19 at the Haxtun Church of the Brethren for the licensing of Roy Pfaltzgraff Jr. to the ministry. Roy went with his family to Nigeria, West Africa, in January 1945, before he was two. In 1967 he went to Garkida, Nigeria, as an agricultural administrator and business manager, to work with his father, Dr. Roy Pfaltzgraff Sr. at the Leprosarium. He married Kathryn Krehmeyer in March of 1964 and they have four daughters. Roy's parents visited their son and family this past summer.

Mark Meakins set the tone for a Bulldog shutout against Hilltop Baptist Saturday when he grabbed the opening kickoff and raced 94 yards for a touchdown. Haxtun took the game 48-0. Meakins rushed for 125 yards and hit the end zone five times in the game.

As last year, Haxtun's town budget carries $450,000 directed towards Fletcher Street repairs. Included in plans are engineering factors geared at improving drainage. The street, known as canal street to most residents, carries rain water and water from melting snow out of town. Town officials plan to submit an application for a Colorado Development Block Grant.

Haxtun Hospital could be under new management after the first of the year if negotiations go well.

Jim Brundige, Hospital aAdministrator, has announced the signing of a letter of intent by the Haxtun Hospital District board of directors with the Denver-based Castle Rock Medical Group to provide management services.

The HHD board of directors has been looking for some time at options that might ease the financial strains for the District. Last year a proposal to merge with Holyoke gained momentum and then fell through when differences of opinions between the two boards surfaced. The District then decided to apply for Critical Access Hospital status which was expected to bring in additional revenues of between $200,000 and $250,00 annual. CA was granted to the District this past summer.

Haxtun's police department is back to full force with the recent addition of officer Paula Nall. Nall, who brings the force to three officers, took her oath of office during a Haxtun Town Council meeting on Nov. 1.

The Haxtun Lady Bulldogs finished their 2010 volleyball season with a win over Prairie during District pool play on Thursday, Oct. 28. Haxtun suffered losses to Merino and Weldon Valley earlier in the day, ending the Lady Bulldogs' season.

The Fleming Lady Wildcats made their way to the 2010 Regional Tournament after a 6-0 showing at the District Tournament last week.