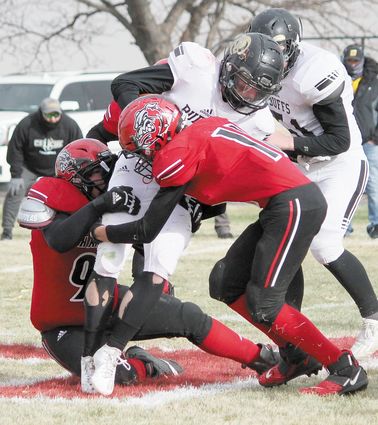 HAXTUN'S Dylan Buccelli, #11, and Gehrig Thompson, #91, put a stop to Caliche's running game during a play on Saturday afternoon in Haxtun. Buccelli tallied 12 total tackles on the day, Thompson had seven.

It was a close one, but the Bulldogs inched out a two-point win over Caliche at home Saturday afternoon. As it turns out, it would be the final game of the season, leaving the Haxtun team with a 3-3 overall record this season.

Haxtun was originally slated to travel to Calhan for week seven action but word came on Tuesday morning that the contest could not be played, putting an abrupt end to the Bulldog football season.

Bulldog sophomore Kyle Fryrear ran the opening kickoff back for an 81-yard touchdown to put the Haxtun on the board just seconds into the game. The touchdown followed wi...