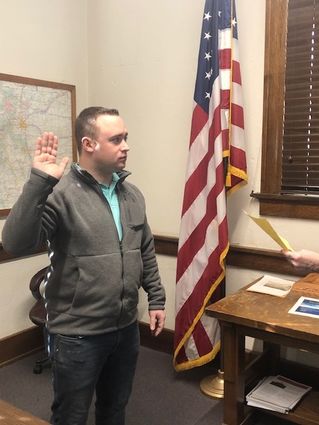 HAXTUN'S NEWEST Police Officer, Cameron Kondella, officially took his oath of office with the Haxtun Police Department on Monday, Feb. 1. The new officer is currently in field training with other officers from the department. His addition to the Haxtun PD brings the local department back to full staff with three officers. Watch for more on Officer Kondella in next week's issue of the Herald.

Haxtun residents could see a ballot question in November pertaining to a major street project. Council members along with Town Superintendent Ron Carpenter looked over several different scenarios to fund the project during a Feb. 1 meeting at the Haxtun Community Center.

According to Carpenter, the project would include 42 blocks of street, which has been mapped out to include those that have been deemed beyond patching, as well as some curb and gutter. Total, he said, the project is estimated to cost $1.6 million.

Carpenter said the 2021 budget includes some curb and gutter work but...