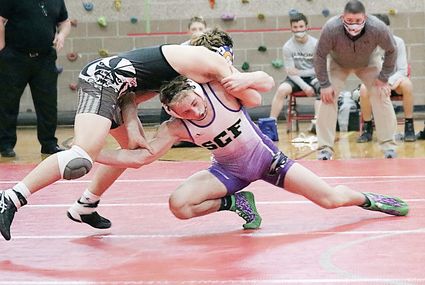 JUNIOR HAYDEN Burr goes in on a shot against Limon's Keon Brandy. Burr defeated Bandy by fall. He wrestled at both 152 and 160 pounds and was 3-0 on the day.

On Feb. 6 the Sedgwick County/Fleming wrestling team traveled to Yuma to participate in a quad against Limon, Yuma and Merino/Akron. SCF defeated Limon 47-28; lost to Yuma 36-44; and beat Merino/ Akron 39-22.

Individual results from the Yuma dual are as follows: