Bulldogs stand undefeated after shut out 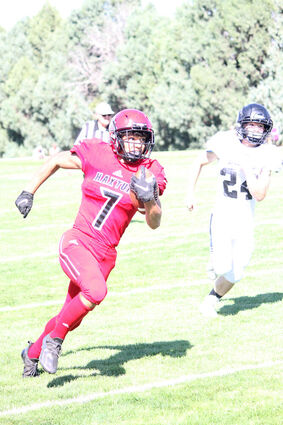 JUNIOR wide receiver Kyle Fryrear looks for running room during the Bulldogs' 50-0 victory over Caliche at home Saturday afternoon. The win gives the Bulldogs a perfect 4-0 start to the 2021 season.

Chalk up another gridiron win for the Haxtun Bulldogs. A 50-0 shutout of the Caliche Buffs leaves the Haxtun football team with a perfect 4-0 record midway through the 2021 season with just five games left on the regular season schedule.

In a warm, Saturday afternoon contest with Caliche it was all Bulldogs as the team put up 22 points in the first quarter alone. With 7:30 on the clock in the first, senior quarterback Owen Knode found junior Michael Gerk open with a short, eight-yard pass to put Haxtun on the scoreboard first. The Bulldogs fell short on the point after attempt but took an early 6-0 advantage. Just three minutes later, senior running back Isaac Andersen found a gap for a 12-yard touchdown. This time Haxtun's Kailin Kelley succeeded on the two-point conversion to widen the scoring gap by eight. With less than two minutes on the clock in the first quarter, Haxtun spread out the offense and Knode connected a 45-yard pass to Andersen for another six. Kelley came through on the two-points after for the second consecutive time.

Early in the second quarter Gerk found an opening for a 57-yard rushing touchdown. Knode kept the ball on the two-points after into the end zone. With just two seconds on the board before the half, Andersen made his way into the endzone with a 34-yard run and Knode followed with the two-point conversion to put the Bulldogs up 38-0 at half time.

Following halftime homecoming ceremonies, where K'lyn Bornhoft and Andersen were crowned 2021 queen and king, Kyle Fryrear broke free for a 39-yard rushing touchdown to surpass the 40 point mark, leaving a running clock for the remainder of the contest. Before the end of the third quarter, Andersen added six-more points to the board from a 38-yard rushing touchdown to give the Bulldogs an even 50. As the clock ticked away, Haxtun defense held the Buffs out of the end zone throughout the fourth quarter for the team's second consecutive shutout this season.

"It is always great to get a win against a Plains conference team and on homecoming," Head Coach JD Stone said. "We started fast but played a little sloppy with a handful of penalties. We will have to have those cleaned up by Friday."

On the ground, the Bulldog team racked up 359 rushing yards led by Andersen with 121 and three touchdowns. Gerk registered 118 yards on the ground and one touchdown. Fryrear carried the ball three times for 54 yards and was in the endzone once.

This week the Bulldogs are set to take on the Dayspring Christian Eagles on the road Friday afternoon. According to Maxpreps, the Eagles are currently 3-1 overall and 1-0 in league play. The team recently earned wins over Akron and Byers but fell to Sanford in early September. Kickoff on Friday in Greeley is 1 p.m.

"With a short week we have a lot of work to get in, Dayspring always has a great offense," Stone said.