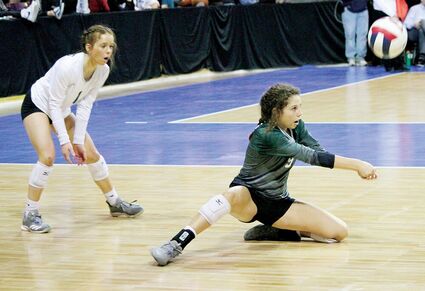 LADY WILDCAT sophomore Madi Serrato gets low for a pass in the 1A State Tournament in Colorado Springs last week as junior Libero Lexi Schaefer looks on.

The Fleming Lady Wildcat volleyball squad has grown up seeing and admiring excellence on their volleyball court. This year's team continued that tradition of excellence, a tradition that started before their elementary years, with a 16th consecutive State volleyball tournament appearance.

First year Lady Wildcat Head Coach Megan Chintala took the reins of the dynasty in the senior season of Sam Pope, Zoey Vandenbark and Whitney Chintala, her younger sister. The trio of this year's seniors grew up watching their coach help bring home a pair of gold balls during her high school years with S...