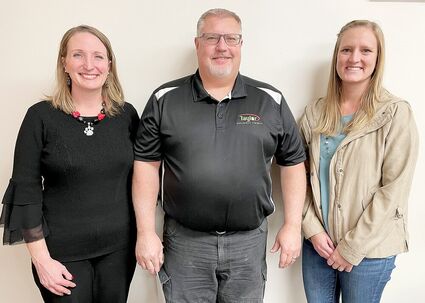 INCOMING BOARD members ChristiAnne Gibson, Dean Michael and Audree Edwards took an Oath of Office to serve four-year terms on the Haxtun Board of Education last week.

Two new members and an incumbent took oaths of office to join the Haxtun Board of Education during a Nov. 16 meeting last week. Incumbent Audree Edwards and newly-elected members Dean Michael and ChristiAnne Gibson joined the Board following elections in early November.

The November meeting held in the high school meeting room last week kicked off with oaths of office for the three board members followed by special recognition of two members leaving the Board. President Richard Starkebaum honored Tamara Durbin and Jay Wisdom for their years of service to the Haxtun School District with...