Bulldogs punch ticket to 8-man Championship with win over Holly 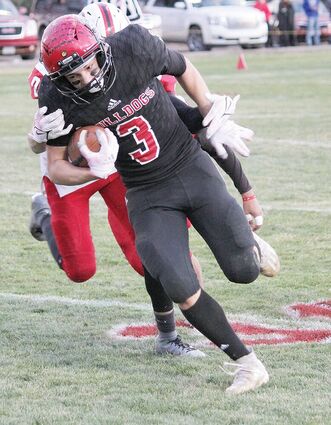 HAXTUN JUNIOR Michael Gerk works to break free from the hands of a Holly Bobcat defender in Saturday's semi-final contest at Adam Wernsman Field. The Bulldogs won the contest to advance to the State Championship later this week.

The Haxtun Bulldogs are perfect on the season and just one game away from the end goal ... a championship trophy. A 46-26 win at home over Holly Saturday afternoon punched the Bulldogs' ticket to the championship contest slated for this Friday at the CSU ThunderBowl in Pueblo. Haxtun, who holds the number one seed in post-season play, will take on the number two ranked Mancos Bluejays in the Colorado 8-man Championship. Mancos slid past Sanford 26-16 for their spot in the final contest this week.