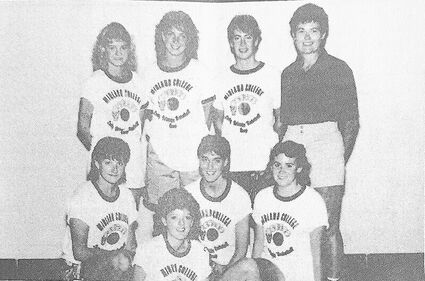 Martin Bryant, a resident of the Haxtun community for nearly 30 years, passed away last Saturday night (July 3, 1937) at the farmhouse where he was farming southwest of town. He was 52 years of age. He also served for a time as a night marshal here.

North County Line - Phyllis Anderson, Arvid Anderson and Hele Trego visited over the Fourth in Greeley. Miss Freda Anderson, who has been visiting here for a couple of weeks, accompanied them home.

Two men dressed in Air Force uniforms stopped at the Highway Service station operated by Ed Buss Thursday afternoon and asked that their car be filled with gas and the oil checked. The car did not need any oil, but the men decided to take a quart anyway. While Mr. Buss went back into the station after the oil, the two men sped away east on the highway. The sheriff at Holyoke was notified and it is reported the men were picked up and found to be driving a stolen car with a Denver license plate.

Leonard Michael of Chanute, AFB, Ill., is home on a week's harvest furlough.

Miss Mary Kurtzer, who is attending school in Greeley, spent the weekend with home folks.

Like so many relatives over a holiday weekend, John Denver decided to drop in on his family for a short visit, landing his Cessna 210 airplane at the Haxtun Airport. Family and friends were working near Haxtun with wheat harvest.

Al Renzelman, Haxtun, walked into his office last Friday as the new superintendent of the Lone Star School District No. 101.

The Haxtun chapter of the Future Business Leaders of America was presented the Hamden Fordner Award for the 10th best chapter in the nation at the national convention held July 14 in Denver.

Community leaders gathered Monday for the official groundbreaking ceremonies for the Haxtun Medical Center on the hospital land: Bob Anderson, a member of the hospital board, holds the shovel the dug up the first piece of turf. The doctors are expected to arrive later this month.

Fleming News - Mr. and Mrs. Steve Sutton are the parents of a baby girl, Mary Katherine, born June 24, in Greeley.

Hello, world: K.C. and Melonie Brammer of Sedgwick announce the birth of their daughter, Tessa Marie, born on July 6, 1992.

Fleming News - Finnis and Virginia Brown will celebrate their 65th wedding anniversary on July 9. Finnis Brown and Virginia Lousberg were married in 1947 at St. Peter's Catholic Church in Fleming.