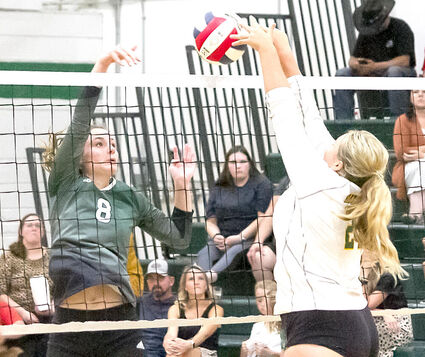 FLEMING LADY Wildcat senior Maddy Harms aims to put a kill through the block of Peetz junior Addison Ramey at Fleming's home opener on Thursday, Aug. 25. The Lady Wildcats took their first of three sweeps for the week over the Peetz Lady Bulldogs in the contest.

In a five-match opening week of volleyball action last week, the Fleming Lady Wildcats took three sweeps in two days of competition. The Lady Wildcats opened at home against Peetz last Thursday where they earned sweep number one before playing at Northeastern Junior College in tournament action on Saturday adding sweeps over Holyoke and Caliche. Saturday's tournament also brought a five-set win over Dayspring Christian and a four-set loss to the defending State Champion Merino Lady Rams.

Several of Fleming's younger players on the floor stepped up over the course of the week's play, putting up top numbers across the board in stats.

Kirkwood tallied double digits in kills for each match on Saturday. She total 67 kills across the four matches with a high of 27 kills in the final match against Dayspring. Serrato and Ciana Lousberg also added solid numbers with 20 and 19 kills respectively.

Serrato led behind the serving line with 13 aces on the day. She tacked on her tournament-high of eight aces in the final match on Saturday.

As a team, the Lady Wildcats put up 35 blocks at NJC. Harms led the group with 11 followed by Serrato with seven.

The Lady Wildcats are scheduled to hit the road this Thursday, Sept. 1. They'll face off with the 5-0 Wiggins Lady Tigers with matches beginning at 4 p.m.

On Friday, Sept. 2, they return to their home court to take on the Idalia Lady Wolves. Matches that day are set to start at 4 p.m.

Contests on Tuesday, Sept. 6, will round out the week. Fleming is scheduled to host Akron that day beginning at 4 p.m.