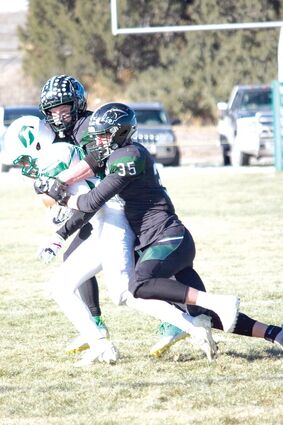 KOLTEN HOUSER, Fleming #35, and Blake Feather team up to take down Granada's Terence Hainer on Saturday. Houser led Fleming's defense with 18 tackles in the game.

Many life lessons, principles and values can be learned on the playing field. One of the most basic and common fundamentals ingrained in athletes is to never give up. Last Saturday's performance proved that the Fleming Wildcats understood the assignment.

It was a contest that should have been the second outing between the second ranked Wildcats and the third ranked Granada Bobcats. But due to a regular season forfeit by Granada, fans weren't given a preview of what was to come in Saturday's 6-man semifinal contest.

The hosting Wildcats got off to a rocky start and allowed the Bobcats t...