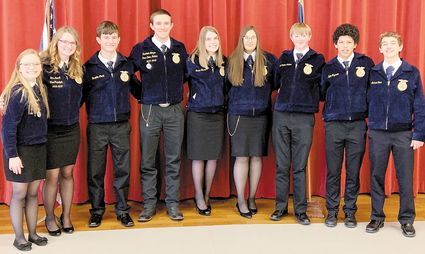 Ten members of the Haxtun FFA Chapter traveled to the Revere High School, where the District 16 speaking contest was held. The morning began with registration and opening ceremonies. After that, the contests began.

The quiz bowl team of Kristopher Hadeen, Michael Gerk and Kyle Fryrear began their day by taking a test that ranked them for the oral tournament. In the oral rounds, the team was asked questions about livestock, crops, farm business management and other ag related topics. The team won their first two rounds, which qualified them for the championship round. They lost the cha...