Bulldogs top Merino by 3 in 1A battle 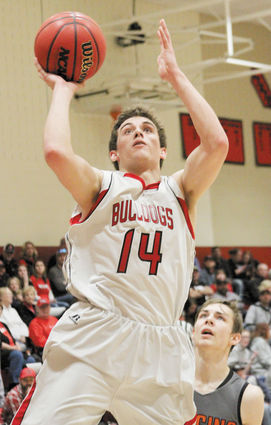 HAXTUN BULLDOG #14 Isaac Andersen lays one up and in during the first half of the Bulldogs match up with Wiggins in the final home game this season. Andersen led his team in rebounds against the Tigers, pulling down six.

With just one regular season game left on the schedule, the Haxtun Bulldog basketball team sits at 7-11 overall and 3-4 in league play, according to MaxPreps.

The Bulldogs are set to face off with top-ranked 2A team Yuma this Friday on the road before heading into District play next week.

Haxtun saw two tough teams this past week as they etched out a three-point road win over Merino Friday night and battled in a tough, physical match up with Wiggins on Friday in the final home game of the season.