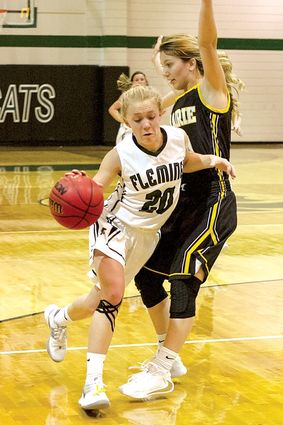 ZOEY VANDENBARK, Fleming Lady Wildcat sophomore, drives past a Prairie defender on Friday, Feb. 14 in a home contest with the Lady Mustangs. The Lady Wildcats went 2-0 last week with wins over Merino and Prairie.

The Fleming Lady Wildcats remain at the top of their league standings, according to MaxPreps, following wins over Merino and Prairie last week. Fleming traveled to the home of the Lady Rams on Tuesday, Feb. 11 and hosted the Lady Mustangs for a Valentine's Day contest on Friday, Feb. 14.

Tuesday's match-up saw Fleming on top by 13 after the first period, 21-8. Merino answered back in the second quarter with 14 points, but Fleming added 17 to their score to go up by 16 before the end of the half.

Fleming added another 17 to their score in the third quarter, bringing their total tally to 55, while giving up just seven to Merino to put them at 29. Merino earned their highest scoring quarter of the game in the fourth with 27 points to settle at 56 and the Lady Wildcats tallied 11 leaving them on top at the final horn with 66.

Junior Kendyl Kirkwood led the Lady Wildcats on the scoreboard with 23 points in the game. She made 10 of 13 two-point shots for 77 percent and went three-for-four at the free-throw line.

Kirkwood also brought down 17 boards for the night - the team high - giving her a double double. She grabbed nine offensive and eight defensive rebounds.

Sophomore Whitney Chintala followed Kirkwood on the scoreboard with 19 points. She shot 100 percent at the charity stripe sinking six of six free throws, earned 10 points on two-point shots and made one three-pointer.

The younger Kirkwood sister followed Kendyl in rebounds for the contest with six and freshman Maddy Harms brought down three rebounds.

Friday night brought the Prairie Lady Mustangs to Fleming's court. The Lady Wildcats earned a 13-point advantage in the opening quarter of play, 19-6. They widened that scoring gap by another seven points in the second quarter, 18-11, to go up 37-17 before the end of the first half.

Third quarter scoring allowed Fleming to add eight more points to their advantage after they scored 14 and held the Lady Mustangs to six. Scoring between the two teams evened out in the fourth quarter with both squads adding seven points. Fleming remained out in front 58-30 as the clock ran out.

Kendyl Kirkwood scored 21 points for the home team against Prairie. She was honored following the contest for hitting the 1,000-point mark in her high school career.

Against Prairie, Kendyl made seven two-point shots and seven free-throws. She also led the team in rebounds with 12 - four offensive and eight defensive.

Chintala followed with a total tally of 17 points. She earned hers by way of two three-point shots, four two-point field goals and three free throws.

Kally Kirkwood followed her sister in rebounds with five. Chintala and Harms both grabbed four boards.

The Lady Wildcats were scheduled to play their final game of the regular season on Tuesday, Feb. 18 when they hosted the Peetz Lady Bulldogs. Results of that contest were not determined as of press time. Watch next week's edition of the Herald for a recap of the Fleming versus Peetz contest as well as District Tournament information.