Wildcats go 1-1 with Merino and Prairie 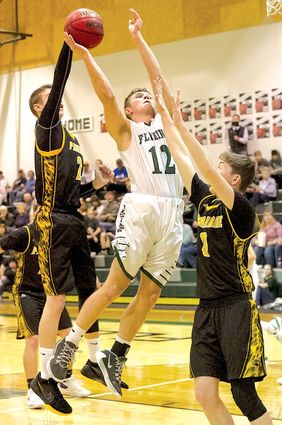 FLEMING WILDCAT senior Brandon Williams goes up for a shot between two Prairie defenders in a Friday, Feb. 14 contest at Fleming. The Wildcats closed the week at 1-1 with a loss at Merino and an at-home victory over Prairie. Their final regular-season game was set for Tuesday, Feb. 18. Watch next week's edition of the Herald for results of that contest and post season info.

The Fleming Wildcats faced off with Merino and Prairie last week leaving one regular-season contest on their schedule for this week. Fleming traveled to Merino on Tuesday, Feb. 11 and hosted the Prairie Mustangs on Friday night, Feb. 14.

The Wildcats held a 12-6 overall record following last week's action with a loss to the Rams and a win over the Mustangs. They stood at 5-2 in their league as of press time Tuesday morning.

Tuesday, Feb. 11's schedule took the Wildcats on the road to Merino where they met up with the Rams for the first time this season. Merino entered the contest at 8-6.

The two teams made an even showing in the first quarter, both the Wildcats and the Rams put up 12 points to start the game off. Merino pulled away in the second quarter after adding 15 points to the Wildcats' five. The home team held a 10-point lead at half time.

Scoring evened out once again in the third quarter with both teams putting up 13 to bring the score to 40-30, Merino.

The Rams' offense added 10 points in the fourth quarter while holding Fleming to eight. Merino closed the game with a 12-point lead, 50-38.

Freshman Braylin Feather led the Wildcat offense with 10 points. The rookie made good on three three-pint shots and went one-for-one from the free-throw line.

On Friday, Feb. 14, the Wildcats hosted the Prairie Mustangs for the two teams' second showing of the season. Fleming earned an eight-point victory in the previous outing in late-January.

The Mustangs led by five after the close of the first quarter in Fleming last Friday. They scored 19 points while holding the home team to 14. The Wildcats were bested once again in the second quarter as the Mustangs added 17 and gave up just 12 to the home team. Fleming trailed by 10 at the half.

The Wildcat returned following intermission to close in on five points of the scoring gap. They added their game high-scoring quarter in the third with 20 points. Fleming held Prairie to 15 in the same quarter.

The home team nearly matched their third-quarter score in the final period. The Wildcat offense managed 19 points while the defense held the Mustangs to nine. The fourth quarter gave Fleming the upper hand and eventually the five-point victory, 65-60.

Comstock led the Wildcats on the scoreboard for Friday night with 24 points. He shot 64 percent from the free-throw line making seven of 11 attempts. He also made good on three three-pointers and four two-point buckets.

Williams hit double digits on the scoreboard for the contest as well with 10 points. He earned his after going 100 percent from the free-throw line at two-for-two and making four two-point shots.

Nolde and senior classmate Daniel Dobson each added eight points for the Wildcats. Nolde went four-for-four from the charity stripe and made two two-point shots. Dobson earned his eight off four two-pointers.

The Wildcats were set to play in their final regular-season contest on Tuesday, Feb. 11. Results of that game had not been determined as of press time. They are set to enter District play next week. Dates and times of those contests were also not determined as of Tuesday morning, Feb. 18.

Check out next week's edition of the Herald for results of Fleming's final contest against Peetz and information on the District Tournament.