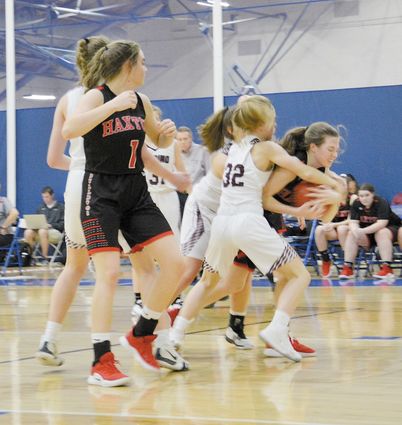 LADY BULLDOG Allie Thompson fights for a rebound under the basket on Friday afternoon at Englewood High School as Brooklyn Davis looks from her rebounding position on the left.

Despite a hard-fought, first half battle, the Haxtun Lady Bulldogs suffered a season-ending loss to the Merino Lady Rams in the first round of Region 2 Tournament action at Englewood High School on Friday afternoon.

The third meeting of the two teams again went to Lady Rams, who advanced in Regional play the following day.

Briggsdale took a 26-point win in that contest, ending the Rams season just shy of the State Tournament slated for later this week.

"This was an exciting week of basketball for our team," Head Coach Arlan Scholl said. "The send-off for our team was really great a...