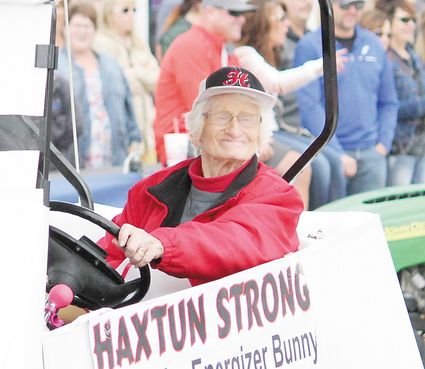 CAROL SCHEEL, who has been selected for the honor of the 99th annual Corn Festival Grand Marshal, rode through the "Haxtun Strong" Corn Festival in 2017. Scheel, a life-long Haxtun resident, was chosen for her unwavering support of Haxtun's youth and athletics.

Five months and counting until the 99th annual Haxtun Corn Festival slated for Saturday, Sept. 26 in downtown Haxtun. This year's event will honor Grand Marshal Carol Scheel, a life-long Haxtun resident. Event organizers also announced an all new line up of entertainment for the evening concert.

Scheel, who received several nominations for this year's honor, is a graduate of Haxtun School and is most often seen in the parade with her classmates or riding through on her decorated golf cart. She was nominated for her unwavering support of Bulldog sports and Haxtun youth. Continue to wa...