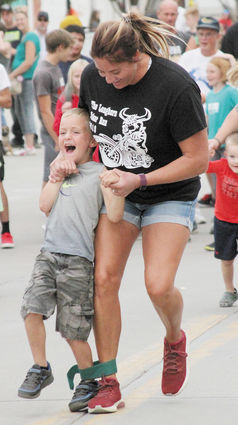 LINCOLN BOWERS and his mom, Kim, head to the finish line in the mother/son three-legged race during street games at the 99th annual Haxtun Corn Festival.

The ever-popular street games drew children and adults to downtown Haxtun Saturday afternoon for the shoe kick, foot race, three-legged race and of course, the egg toss. Results from Corn Festival street games are as follows: