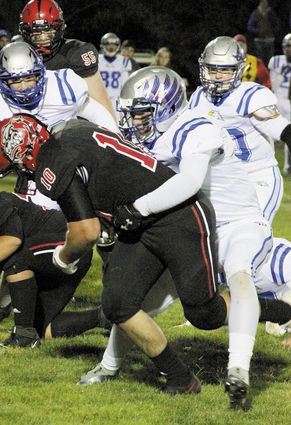 OZZY COSS pushes past defenders in Haxtun's win over Dayspring Christian Academy at home Friday night. Coss had a total of 113 yards on the ground in addition to capitalizing on several big fourth down plays late in the game.

The Bulldogs picked up the win in an 8-man Plains conference battle with Dayspring Christian Academy in Haxtun at Adam Wernsman Field on Friday night. The win puts the Bulldogs at 1-1 on the season as the team prepares to face off with the defending five-time State champion Sedgwick County Cougar squad this week.

The Bulldogs received the kick-off on their own turf in the 2020 home opener and made a statement from the start. Michael Gerk found an open gap for his first of several rushing touchdowns in the contest as he put the Bulldogs on the board with six in their first possession of...