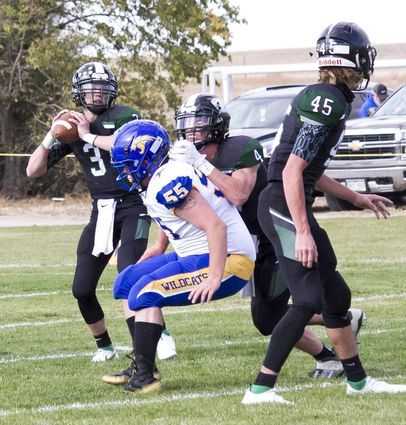 FLEMING LINEMAN Chris Goss blocks for quarterback Kade Comstock as Brady Kuntz, #45, watches for the pass in a recent contest against North Park. All three seniors were key players in the Wildcats' win over Prairie last Friday allowing Fleming to maintain their undefeated season.

The top-ranked Fleming Wildcats traveled to New Raymer where they faced off with the fifth ranked Prairie Mustangs in 6-man action last Friday night. Both teams sought to maintain their undefeated season as they entered the contest at 2-0.

The Wildcats kicked off in the opening quarter to start the game and Prairie fielded the ball just shy of Fleming's goal line and returned nearly 25 yards before being caught up by Fleming's defense. The Mustang offense chewed over six minutes off the clock in their opening possession of the game, but turned the ball over following a 12-play drive.