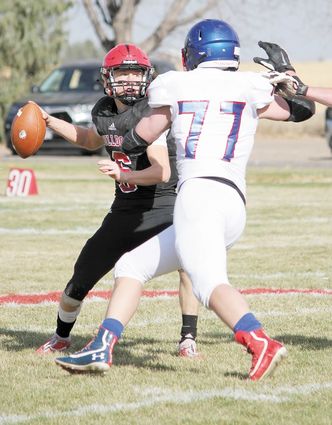 HAXTUN QUARTERBACK Owen Knode drops back for a pass while under pressure from Akron's Kacyn Kessinger Saturday afternoon. Knode connected with six of 12 passes for a total of 84 yards in the contest.

Saturday turned out to be an almost picture perfect afternoon for football. The day kicked off with parent recognition, highlighted past Bulldog State Championship teams and ended with a Haxtun win over Akron. The conference victory over the Rams puts Haxtun 2-3 overall and 2-2 in league play.

Before kickoff, each Bulldog football player recognized their parents, running onto the field with their dads, meeting moms at mid-field, an annual tradition in Haxtun as each season winds down. Following a virtual coin flip, Haxtun received the kickoff and went to work. As the Bulldogs marched...