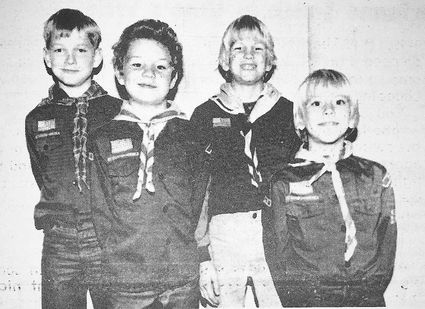 BOBCAT AWARDS were given to three Haxtun Cub Scouts. Also, a Bear award was given out. From left are Dale Chaney, who earned a Bear award; Stacy Gibbs, Tyler Knode and Ryan Salvador, who earned Bobcat awards.

Enthusiasm rampant in Haxtun Harvest subscription drive: when the announcement was read in last week's issue of The Haxtun Harvest that this publication would award free to the ladies, married or single and living in Phillips or adjacent communities, over $2,000 in handsome prizes, the entire country side received the good news in worthy fashion. Featuring two 1936 Chevrolet automobiles as grand capital prizes, The Harvest has been extremely elaborate in its gift distribution to those ladies receiving high honors in the prize campaign. As votes are granted on renewal subscriptions, this feature in itself insures every contestant the cooperation of their many friends. Double votes are granted on all new subscriptions.

Dailey: Mrs. Leslie Gabel is representing The Haxtun Harvest in this community.

North County Line: Lillian Cronquist was making calls in this community Monday in connection with her work as a contestant in The Harvest circulation campaign.

Sunday afternoon at two o'clock in the home of Mr. and Mrs. J.O. Cunningham, their daughter Viola became the bride of Ralph Lambert, son of Mr. and Mrs. W.T. Lambert of New Raymer. The impressive double-ring ceremony was performed by Rev. George M. Burnworth.

Haxtun Herald makes its debut on Thursday morning with new newspaper. Karen Smith, a former employee of the Julesburg Advocate, has been named editor of the new publication. She will move to Haxtun in the near future. This newspaper is being started from scratch with no second-class mailing privileges, no subscribers, no permanent address, not even a telephone number.

Sandy Ham, who made her athletic debut at Haxtun, heads for Knoxville, Tenn., this week with an excellent chance at qualifying as All-American, according to Gary Bjorklun, assistant track coach at CSU. Sand will be competing with about 150 other young women from all over the country. The top 35 will qualify for All-American.

Santa Claus plans a visit with young children during Haxtun's Country Christmas on Monday, Nov. 29. The man in red is set to take his fire truck ride down main street to the fire hall where he will hear children's wishes during the annual chili supper from 5-7 p.m.

Essays written by two Haxtun High School students recently qualified for the District level competition in the Veterans of Foreign Wars Voice of Democracy contest. Matt Wilcox and Kent Hiller both wrote an essay in response to the question "Does my generation have a roll in America's future?"