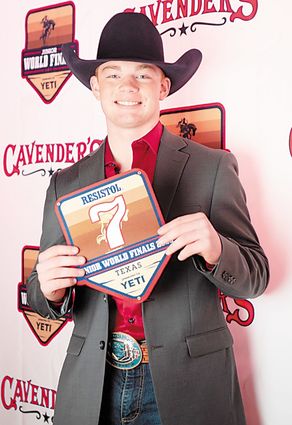 In spite of a knee injury, Cash Fuesz was recognized at the fifth annual Junior World Finals calf roping on Dec. 7.  Historically, this event has taken place in Las Vegas, Nev., but was moved in 2020 to Ft. Worth, Texas.

Fuesz spent nine months of the year traveling to various events to gain points.  Cowboys with the most points earn the highest back number. Fuesz qualified in the number seven position in the 19 and under division.  The top 35 point-earners represented 11 states: Texas, Oklahoma, Kansas, Florida, Louisiana, New Mexico, Idaho, Tennessee, California, Utah and Arizona.

Fuesz was honored during the back number ceremony that took place in downtown Ft. Worth on RFD TV's lawn.  In addition to his back number he was presented with a Tres Rios trophy pendent.

Fuesz was unable to compete in the three go-arounds of roping that took place in Alvarado, Texas and in the historic Cowtown Coliseum in Ft. Worth but was able to watch and assist his friends.

He also qualified for the Mike and Sherrylynn Johnson, "Vegas Tuffest" calf roping event by winning a qualifying event in Tulsa, Okla. on July 5.

Fuesz is the 17-year-old son of Cory and Heather Fuesz, Eureka, Kan. He is the grandson of Clint and Irlene Huntington, Eureka, and Gary and Vicki Fuesz, Haxtun.