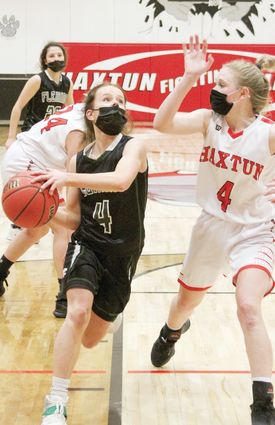 LADY WILDCAT sophomore Lexi Schaefer looks to score as Haxtun's K'Lyn Bornhoft defends the basket in a recent contest between the two teams in Haxtun. Schaefer went on to add nine points in the Fleming's most recent outing at Genoa-Hugo last weekend.

Fleming's Lady Wildcats squared off with Genoa-Hugo last weekend in their lone contest of the week. The two teams put on an exciting show in an evenly-matched game that ended with Fleming on top by three points after a single overtime quarter.

The local ladies opened with just two points on the scoreboard, but gave up nine to the hosting Lady Pirates. Genoa-Hugo led by seven after the first, 9-2.

Fleming's offense upped their game in the second quarter to close in on five points of the scoring gap. They added 10 points and held the Lady Pirates to seven bringing the score to 16-12, Genoa-Hugo.

Following the halftime intermission, Fleming would come out to claim the lead and go up by four, outscoring the home team 12-4 in the third quarter.

With a tally of 24-20, Fleming led heading into the final quarter of regulation. Genoa-Hugo fought back putting 13 points on the scoreboard while holding Fleming to nine to even the tally at 33-all at the final horn.

A few minutes of overtime was all the Lady Wildcats needed to nab and retain the win. They added six in overtime and held the Lady Pirates to three to take a three-point, 39-36, victory on the road.

The Lady Wildcats' lone senior, Kendyl Kirkwood led her team with a double-double for the night. She tallied 20 points on the scoreboard with 16 two-point shots from the field and four points on the house. Under the net, Kirkwood brought down 13 boards; four on offense and nine on defense.

Sophomore Lexi Schaefer followed on the scoreboard with nine points. She made good on one three-point shot, two two-point field goals and went two-for-two at the charity stripe.

The Lady Wildcats met up with Merino on Tuesday, Feb. 9. Results of that game were not available as of press time.

Fleming is scheduled to host Kit Carson on Saturday, Feb. 13 beginning at 2 p.m. The Kit Carson Lady Wildcats held an undefeated 5-0 record as of press time on Tuesday afternoon with a scheduled Tuesday evening match-up with the undefeated Simla Lady Cubs. Kit Carson is also slated to face off with Granada on Friday night before heading to Fleming.