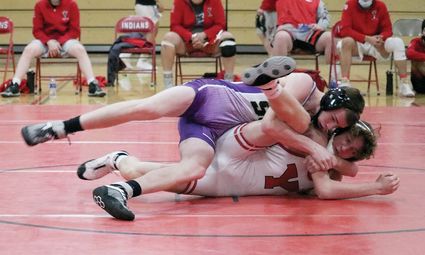 Saturday, Feb. 13, the Sedgwick County-Fleming wrestlers traveled to Estes Park for a quad with Estes Park, Lyons and Lutheran. SCF defeated Estes Park in the first dual 45-9. They then defeated Lutheran 42-30 in their second dual of the day. Their final dual was against Lyons and they came up short, losing this dual 39-27. Individual results from the quad are as follows:

Freshman Kaiden Schelling competed in the 106-pound class. He went 2-1 on the day. He lost his match against Bram Jackson from Estes Park 9-5 and won in the other two duals by forfeit.

Sophomore Jack Bornhoft was 1-2 and wrestled at both 120 and 126 pounds. Bornhoft lost to Elijah Kitchen of Estes Park at 126 pounds by fall, defeated Peyton Holt of Lutheran with a fall in 3:03 at 120 pounds and ended his day with a loss at 126 pounds to Christian Keller of Lyons.

132-pound freshman Keegan Colglaizer was 1-2 on the day. Colglazier defeated Sammy Miller of Estes Park with a fall in 5:39 and then lost his match against Preston Holt of Lutheran by fall and Oran Huff of Lyons by fall.

Junior Joel Muller wrestled at 138 and 145 pounds and ended his day 2-1. Muller defeated Michael McCown of Estes Park 8-4 at 138 pounds. He then beat John Justus of Lutheran with a fall in 1:25 at 145 pounds. His final match of the day was against Lyons Jaden Gardner at 138 pounds. He lost this match 8-5.

152-pound junior Hayden Burr was 3-0 on the day winning all three matches by pin. Burr defeated Gustavo Rojas of Estes Park with a fall in :54, David Bond of Lutheran with a fall in 3:25, and Dequlyn Keller of Lyons with a fall in 2:30.