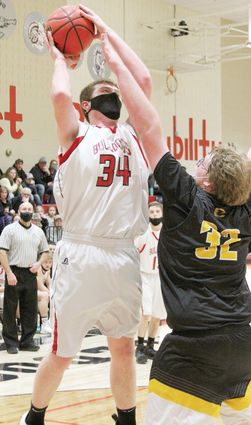 RYAN TEMPEL, Haxtun Bulldog #34, puts up a shot over Caliche's Justin Pollart on Friday night. Tempel scored 10 points for his team in his final home game as a Bulldog.

With just two games left on the regular season schedule, the Haxtun Bulldogs hold a 7-3 overall record after picking up a win over Caliche but falling to Yuma last week. The team is set to still face off with Wiggins and Otis in away contests before post-season play begins.

Haxtun hosted Caliche at home Friday night in the final regular season home game on the schedule. Things ended at 11-all after the first quarter of play but the Bulldogs began to pull away in the second as the team outscored their opponent by nine just before half time.

The Buffs made a third quarter rally but Haxt...