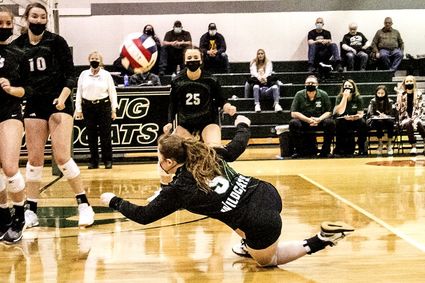 Last week put the Lady Wildcats on the court with the Holyoke Lady Dragons, the Prairie Lady Mustangs and the Arickaree/Woodlin Lady Indians. The local ladies dropped just one set for the week bringing their season set tally to 33-3.

The week opened last Tuesday with a home match against the Holyoke Lady Dragons. Holyoke became the second team to take Fleming past three sets in a match this year. The Lady Wildcats took a four-set victory winning sets one, three and four by scores of 25-16, 25-20 and 26-24. Holyoke won set two 25-17.

Junior Whitney Chintala led her team for the match at the net with 21 kills and from the back row with 29 defensive digs. She received 28 serves with just two serve-receive errors.

Sophomore Kally Kirkwood followed Chintala with 14 kills at the net and added two blocks for the Lady Wildcat defense.

Junior Sam Pope served 100 percent for the night. She tallied the team-high aces with three. Sophomore Laney Schliesser followed with two aces and one serving error.

On Friday night, the Lady Wildcats took on Prairie on the road and earned their eighth sweep of the season. The Lady Mustangs fell 25-14, 25-9 and 25-14 in sets one through three.

Kally Kirkwood led the Lady Wildcat hitters for the night with 12 kills. Chintala followed with nine.

Freshman Madi Serrato served over two aces - the team high - on 11 attempts with one error.

Chintala and sophomore Lexi Schaefer led the squad's defense from the back row in digs. Chintala put up 10; Schaefer followed with nine.

Saturday's match brought the Arickaree/Woodlin Lady Indians to Fleming where they fell in three sets, 25-5, 25-15 and 25-8.

Nearly every member of the Lady Wildcat roster added digs in the contest. Chintala led the group with nine followed by Schaefer and Schliesser with six apiece. Serrato, Kendyl Kirkwood and junior Zoey Vandenbark, who made her debut appearance of the season this weekend after returning from injury, each added five digs.

Sophomore Maddy Harms led the Lady Wildcats' serve game with four aces. She put 15 over the net with no errors. Chintala followed, also with a perfect service percentage on 17 serves with three aces.

The Lady Wildcats will wrap up their regular season play this week with contests against Merino, Weldon Valley and Sterling. They faced off with the Lady Rams on Tuesday, April 20.

On Thursday, April 22, they're scheduled to travel to Weldona to face off with the Lady Warriors in their final league match this season. Weldon Valley held a 7-4 record as of press time on Tuesday morning. Thursday's match is slated to start at 5 p.m.

Friday evening, April 23 brings the Sterling to Fleming's court. The top-ranked 3A Lady Tigers hold a 9-2 overall record on the season. That match is set for a 5:30 p.m. start time.

Regional action is set to begin on Saturday, May 1. Watch next week's issue of the Herald for a regular season wrap up and post-season details.