Bulldogs move to 3-3 on the season; prepare for Caliche this week 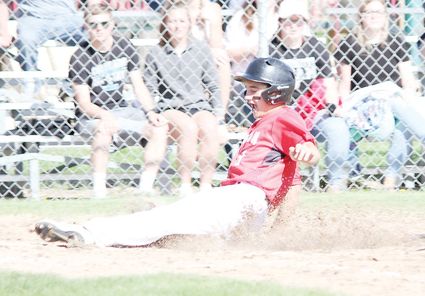 MICHAEL GERK slides into home plate late in the game Thursday afternoon as the Bulldogs took a 6-1 win over Yuma.

The Haxtun Bulldogs moved to 3-3 on the season following a home-field win over Yuma and a loss on the road in Wray last week. This week the team is set to take on Caliche at home in a Saturday afternoon contest.

Haxtun hosted the Yuma Indians last Thursday after heavy rain fall postponed the contest originally slated for Tuesday. Some early afternoon showers cleared just in time for the first pitch, allowing both teams to take the field in a Lower Platte League match up.

The Bulldogs found themselves down by one run after the first inning of play but took a 2-1 lead in the bottom of...