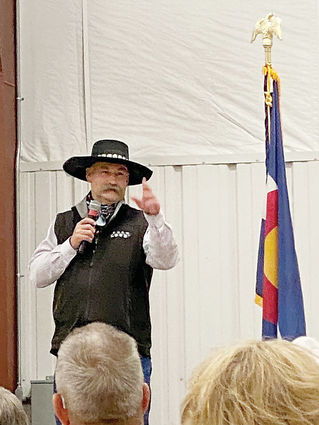 TRENT Loos of Loos Tales speaks to a large crowd during the recent 75th celebration of the Haxtun Conservation District.

Over 150 patrons of the Haxtun Conservation District joined together, June 14 to acknowledge the accomplishments of the district over the past 75-plus years. Congress passed the Soil Conservation Act on April 27, 1935 during the dust bowl days to allow districts to form. The Haxtun District originally consisting of two townships Logan County and three townships south and east of Haxtun, was established by referendum of the landowners. They were issued a certificate of organization on May 25, 1945 and declared to be a lawful Soil Conservation District by the Colorado Secretary of State on...