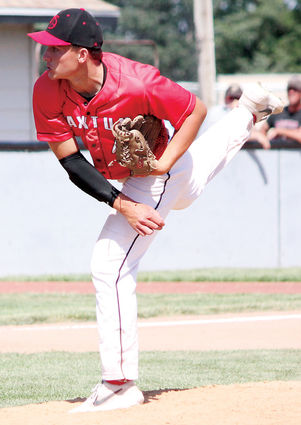 ISAAC ANDERSEN follows through on his pitching form during the Championship match up with Merino at Districts last week. The Bulldogs advanced to Regional play, where they suffered a one-run loss to Dove Creek Saturday morning.

A tough, eight inning battle left the Bulldogs short just one run Saturday morning but despite a season ending loss at Regionals, Head Coach Trent Ham expressed his appreciation for the growth his team made over the past few months.

"Our boys improved all season long and were playing some great baseball by the end of it," Ham said at the conclusion of the 2021 season. "Although we came up just short in Regionals, I couldn't have been more proud of our team."

Regional baseball action kicked off late last week and as the number nine seeded team, Haxtun faced off with the eighth ranked Dove Creek Bulldogs. Region 1 action took the Haxtun team to Johnstown where they faced off with Dove Creek in game one of the day's line up.

Dove Creek went up 1-0 in the first inning and added three runs in the second to take an early 4-0 advantage. In the top of the third, the Bulldogs made their way onto the board, scoring three runs to narrow in on Dove Creek's lead.

Dove Creek extended their lead to two late in the fourth and added two additional runs in the sixth but it was all Haxtun in the seventh as the Bulldogs in red put up three runs to even things out at seven all. The late game rally by the Haxtun Bulldogs sent the contest into extra innings.

Early in the eighth, four Bulldogs crossed home plate to put Haxtun out in front 11-7 but in the bottom of the inning, Dove Creek managed five runs that put them ahead by one, ending the contest with Dove Creek ahead, 12-11.

"We faced a very solid team in Dove Creek and both teams battled for eight straight innings," said Ham. "We overcame a lot of adversity, which made for an exciting game throughout."

Dove Creek's win over the Bulldogs sent them to the Region 1 Championship where they faced off with the top ranked Flatirons Academy Buffaloes. Flatirons Academy took that contest, 1-0, to advance to the final four. The Buffaloes are set to take on Nucla on June 23.

On the opposite side of the bracket, Holly and Merino emerged as the top two teams and will face off following the Nucla/Flatirons Academy game on Wednesday. The top two teams out of the final four will be featured in the 1A State Championship slated for 2:30 p.m. on Wednesday, June 23.

The Haxtun Bulldogs ended their season with a final 9-8 overall record and will lose three seniors from this year's lineup including Ryan Temple, Dylan Buccelli and Dusty Anderson, all who graduated in May.