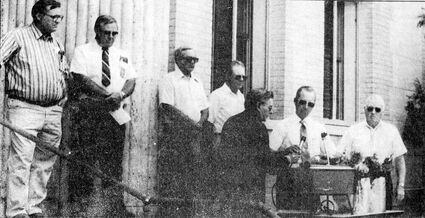 Stricken by an acute attack of illness, Mrs. Oliver (Leona Plog) Lambert passed away suddenly Monday morning at her home near Dailey. She was 37 years of age and the mother of two small children.

Special services are being arranged for next Sunday, Aug. 2, to celebrate the 10th anniversary of the Community Evangelical Church at Dailey. The Rev. L.E. Gabel is pastor of the church.

Mr. and Mrs. C.W. Scofield and son Jerry Dale arrived in Haxtun Tuesday from Joes and will make their home here. Mr. Scofield will take up his duties as vocational agriculture instructor in the high school.

Relief from drought and extreme heat came to the Haxtun area this week in the form of a gentle rain, bringing life-giving moisture to the corn and feed crops in this section. Resulting moisture measured 1.57 inches, according to the governement rain gauge at Haxtun.

No. County Line News - The wheat runs from three to 20 bushels. The hum of combines is yet heard, but they are nearly through. Some that used binders are preparing to thresh.

The Haxtun community was deeply saddened Friday (July 27, 1951) when it learned of the death of O.E. Johnson, or "Ebbie" as he was known to friends and family. He was 67.

Funeral services were held Friday afternoon (July 27, 1951) from the Radford Funeral home for Frederick Daley, two-year-old son of Mr. and Mrs. Jerome Daley, LaPorte, who died Wednesday morning. The little boy in some way escaped from the fenced-in yard at his home and fell onto some rocks in the Poudre River that runs near the family home.

Jack Price, son of Mr. and Mrs. Vern Price Sr., was painfully burned last Wednesday when he stumbled and fell, thursting his hands and arms into to pails of tar he was carrying. He was wearning gauntlet gloves at the time of the accident, which filled with hot tar. He is employed by the Sturgis Roofing Company. After receiving emergency treatment in Holyoke, he was brought to the Haxtun hospital, where he is now a patient.

Donald Holloway has been named 4.H youth agent in Yuma and Phillips counties for the Colorado State University Extension Service. He will be stationed at the Yuma County office in Wray and assumes his new duties this week. He and his wife Sharon and their five children will live in Wray.

The Haxtun Volunteer Fire Department was called to the Floyd Garretson farm four miles north, five east and one-fourth mile north of Haxtun on Tuesday for a grass fire that had spread out of control.

Chris Hohweiler, Gypsum, has been hired as instrumental and high school vocal instructor to teach in the Haxtun School District. He and his wife Martha, also a music major, will be moving to Haxtun the later part of July.

Mr. and Mrs. Pete Osmus of Wray are the parents of a boy, Mathew D., born July 7.

Mr. and Mrs. Lynn Seger, newlyweds, were honored with a covered-dish picnic at the park Saturday evening. After the picnic, Lynn and Cindy opened gifts. Those attending were neighbors and members of the Silver State Club.

Folks and cars turned out for Haxtun's Old-Fashioned Saturday night last weekend. Cruisin' main street were about 30 cars fo all types and age.

Crowds also gathered for grilled hamburgers and homemade ice cream. Some trophy winners: Damon Koch, polished up his 1950 Ford pickup to win first place in the antiques division. The Widgery gang carried off the loot in their getaway vehicle, a 1934 Ford coupe featuring a chopped roof and polished exterior. The daily driver division trophy went home with Richard and Barbara Kurtzer for their 1966 GMC pickup.

It is inevitable that things change. It is how one responds to change that true colors shine. With faith in God, strength from family and his own determination, Ben Cox's colors have not only shined, but they have gleamed since a horrible accident left him paralyzed almost five months ago. One thing that Ben hasn't let change though is his goals for success in life.

The Phillips County Commissioners reported another great month for the playground project at Homesteaders' Park with the receipt of two grants totaling over $45,000.