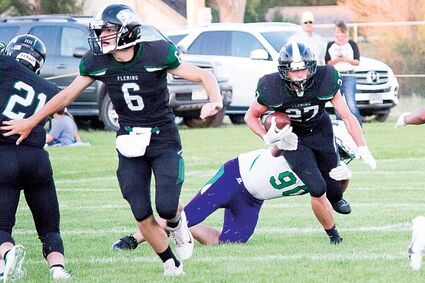 #6 BRAYLEN FEATHER, the junior starting quarterback for the Fleming Wildcats this year, blocks for junior running back Nolan Japp in this year's season opener against Arickaree/Woodlin. The Wildcats are set to host Flagler this Saturday at 1 p.m. for this year's homecoming contest.

Week two of 6-man football action put the Fleming Wildcats on the road to Peetz where they faced off with the Bulldogs. Both teams took wins in the opening week of play; Fleming won at home over Arickaree/Woodlin; Peetz took a home win over Miami-Yoder.

Fleming jumped to an early lead over the hosting Bulldogs last Friday afternoon. They tacked on 22 points while holding the home team scoreless to go up 22-0 in the first quarter.

The Wildcats expanded their lead by another 24 points before the close of the half. Fleming's offense scored 24 while the defense held Peetz out of the end zo...