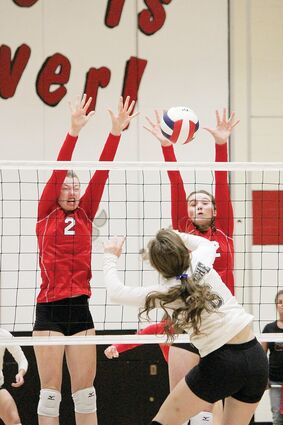 BLOCKERS Allie Thompson, #2, and Bobbi Starkebaum, #12, get up for a block in the homecoming match up with Caliche two weeks ago.

The Haxtun Lady Bulldogs added another notch to the win column in their lone contest last week. A three-set sweep over the Lady Eagles in Wray leaves the Lady Bulldog 10-2 overall and 4-0 in league play, according to Maxpreps.

Haxtun will face off with top-ranked Merino at home on Friday and turn around and host the neighboring Fleming Lady Wildcats on Tuesday.

Senior Allie Thompson had a stellar performance at the net, putting down 17 of 36 kill attempts for a .444 hitting percentage...