LEONA (Salvador) Hunt, from Haxtun High School's Class of 1946. Hunt was honored at the recent Alumni meeting as the oldest member present.

The annual meeting of the Haxtun High School Alumni Association was held at the High School Gymnasium on Saturday, Sept. 25. Approximately 75 members, spouses and friends were present. The Class of 1971 hosted the event with Bob Bruce, Eaton, as master of ceremonies.

The meeting began with LaVonne Hart, Alumni Coordinator, welcoming the group after which the Pledge of Allegiance was recited. Hart reported that the Alumni Scholarship Fund is being funded by donations and is solvent at the present time.

Recipients of the 2021 scholarships of $500 were given to Kylee Workman, daughter of Todd and Becky Workman, and to Ryan Tempel, son of Adam and Staci (Starkebaum)Tempel. Tempel stopped in for a few minutes to be recognized as a recipient. He thanked the Alumni for the scholarship given to him.

Hart reported that in January 2020 the Alumni Association received a generous donation from the George (Doc) McColloch Trust. His son George and daughter-in-law Barbara (Pack) McColloch, are 1959 graduates of Haxtun High. 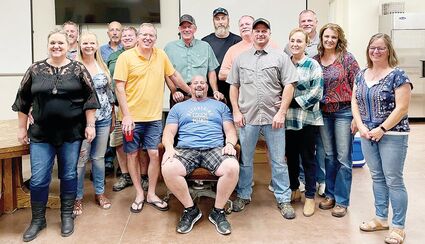 The Class of 1971 was invited to come to the front to be recognized after which Bob Bruce went to the podium to introduce honor classes present at the meeting. He shared some humor with the group.

Leona (Salvador) Hunt, a 1946 graduate, was recognized as the oldest Alumni member present. Bruce presented her with a Bulldog t-shirt, a gift from him. Bruce proceeded to call for members of this year's honor classes. The classes of 1960 and 1961 were introduced together. They had a combined reunion on Friday and Saturday evenings.

As Bruce invited other classes to be recognized he asked them some trivia questions about top tunes of their respective eras. He presented people with a Bulldog t-shirt or cap when they were able to answer the trivia questions.

Bruce invited the group to sing the school song together. Hart thanked him for his help with the meeting. A moment of silence was given to remember graduates who have passed away.

Refreshments of cookies were offered which were provided by the Class of 1971. The next meeting of the HHS Alumni will be on Sept. 24, 2022. The Class of 1972 will be asked to host the next gathering.