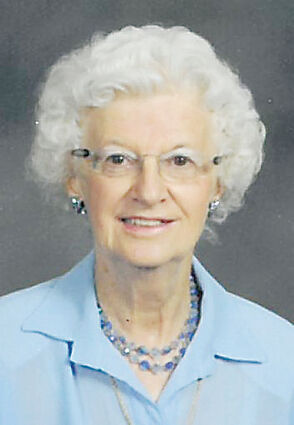 Roberta E. Johnson Gizinski departed this lifetime on her 92nd birthday on Oct. 23, 2021 in Denver.

She was born on Oct. 23, 1929 in Haxtun to Robert and Irma Johnson. Roberta grew up on a farm in Eastern Colorado during the challenging times of the Depression and on into World War II. Many stories over the years recounted how her tremendous strength was formed from an early age and continued through her entire lifetime.

Roberta attended the first eight grades south of Haxtun in a one-room school house of the Sunbeam District. Her high school years were then in Haxtun and she graduated there in 1947.

Shortages for teachers after WWII created an opportunity for a young high school graduate like herself to take summer school classes at University of Northern Colorado in Greeley for three years and obtain her Emergency Teachers Certification, allowing her to teach grades one through four at Rockland County School from 1949 to 1951.

In August, Roberta married Eldoris F. Gizinski at St. Patrick's Catholic Church in Holyoke and began her life as a wife and mother on the farm southeast of Holyoke. Two sons were born while the family lived on the farm; Michael Robert in 1953 and Kevin Lynn in 1965. Roberta bravely forged ahead during these years enduring extreme hardship of miscarriage and crop failures, yet never wavering in her faith and belief that life would get better.

After moving into town in 1969 and realizing her love for educating children, Roberta returned to the Holyoke School District as a dedicated teachers aid in grades one through six until 1986 when she and her husband Eldoris moved from Holyoke to Sterling.

Realizing the value of hard work and her love for engaging with so many people, she began her next career with Walmart Stores in Sterling from 1986 until 1991 when she transferred with the company to Walmart in Ft. Collins, where she worked until 77 years of age and finally retired! Roberta and Eldoris enjoyed their years living in Loveland from 1991 to 2007. Unafraid of change in life, Roberta moved to Denver in 2007 at age 77 and enjoyed her final years here meeting even more new people and situations. While in Denver, Roberta made many new friends living at Eden Manor Retirement Apartments, Holy Family Plaza and Argyle Assisted Living. Ultimate decline of health forced Roberta to reside at St. Paul Health Center in Denver where she received excellent and caring assistance from the staff there until her passing.

Roberta is preceded in death by her parents; husband Eldoris in 2003; and an infant daughter Patricia Ann in 1954.

Many people have crossed her life in Eastern and Northern Colorado. Roberta loved people and she managed to establish quite a large following of supporters and friends over the years. Her memory will live on as the example of love and strength in her family and everyone she encountered in life.

Graveside services were held on Nov. 1 at Loveland Burial Park. A Memorial service is planned for Sunday May 1, 2022, time and place pending.