Bulldogs advance to quarterfinals after 56-16 victory over Byers 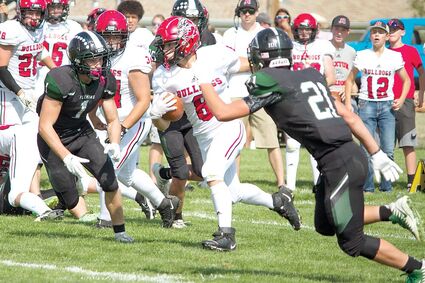 Bulldog captains won the toss under Friday Night Lights in Haxtun and elected to receive. After just a handful of plays in the Bulldogs' initial drive, junior Michael Gerk found an opening for a seven-yard touchdown run to put the home team on the board with six. Haxtun came up short on the points after attempt but held an early lead.

Haxtun's defense held Byers in their first possession of the ball game and in a long third and 10 situation, junior Maclin Tempel tipped a pass attempt, forcing the visiting Bulldogs to punt the ball away. In a bad snap and punt attempt, Byers gave up possession at the 35-yard line, putting the home-town Bulldogs in prime scoring position. Gerk punched one in, again, this time from four yards out and the Bulldogs in black made good on the points after attempt to go up 14-0 with seven minutes still on the clock in the first quarter.

With just over four minutes left to play in the first, senior quarterback Owen Knode found Gerk open in the endzone with a seven-yard pass to widen the scoring gap to 22-0.

The Bulldogs opened the second quarter with a short run from Kailin Kelley for another six points. A wonky kickoff from the Bulldogs after the touchdown followed by a series of penalties set Byers up for their first scoring opportunity of the contest. Byers managed a one-yard touchdown run for their first six points of the game.

However, it was all Bulldogs for the remainder of the first half as Haxtun went on to score three unanswered touchdowns before half time. The home team Bulldogs held a 48-8 advantage over Byers at the mid-way mark.

Halfway through the third quarter, Gerk tacked on a 27-yard touchdown run to Haxtun's already impressive score to widen the scoring gap by another eight.

With just a minute left in the game, Byers snuck one in with a short, 10-yard pass for a final 56-16 score in favor of Haxtun.

Gerk caught four passes in the air for a total of 90 yards and two touchdowns. Isaac Andersen also registered four catches on the night for a total of 59 yards. Keegan Colglazier caught one pass for 14 yards.

The Bulldog offense racked up 281 yards on the ground led by Gerk with 124 yards off 14 carries. Gerk registered 8.9 yards per carry and three rushing touchdowns Friday. Andersen tacked on 118 yards from eight carries including two touchdowns. 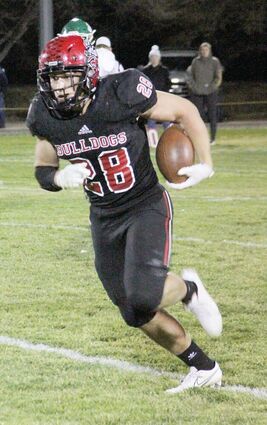 SENIOR RUNNING BACK Isaac Andersen carries the ball in a playoff home game against Byers on Friday night. The Bulldogs advance to the Great 8 and are set to travel to take on the Rams in Akron on Saturday afternoon.

The win over Byers pits the Bulldogs in a quarterfinals match up with Akron this Saturday at 1 p.m. at the home of the Rams.

The two teams met up for the final game of the regular season with Haxtun coming out on top 58-0.

Akron advanced to the quarterfinals with a 47-22 win over Calhan last week. Winner of this week's quarterfinals action will go onto face the winner of Dove Creek and Holly in semifinals next week.