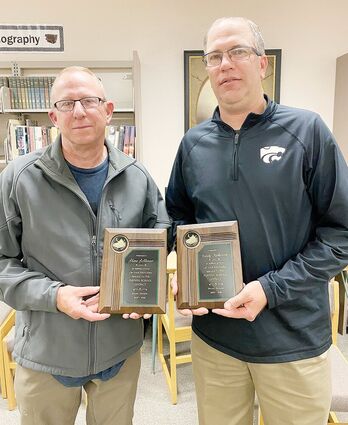 RETIRING Board of Education members Shane Schliesser, left, and Randy Kirkwood were honored for their years of service to the Frenchman Board of Education at their final meeting earlier this month. Schliesser served on the local board in Fleming for four years and Kirkwood for eight, including a role as President for the past few years.

Two new members officially joined the Frenchman Board of Education in Fleming. Karianne Donnelson and Nick Wernsman took their oaths of office at a Nov. 8 meeting. The two fill seats previously held by retiring members Shane Schliesser and Randy Kirkwood.

Kirkwood opened the meeting as President for the final time. He has served on the local school board for a total of eight years.

At the start of the meeting, Scott Szabo presented the 2020-2021 audit. Szabo said the District is in good financial standing and complimented Amber Schliesser, Business Manager, in her role in working...