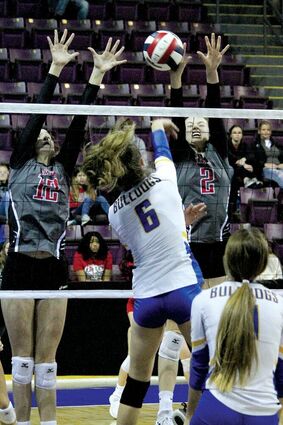 LADY BULLDOG BLOCKERS Bobbi Starkebaum, #12, and Allie Thompson, #2, get up above the net to deny a kill from a Dove Creek hitter at the 1A State Volleyball Tournament Saturday morning.

Overall 24-5 and a final-four finish at the 1A State Tournament, but really, it isn't about the numbers that stands out about this year's Haxtun Lady Bulldog volleyball team. It's the grit, determination and heart that each one played with throughout the season and into the State Tournament that most will remember. All the aforementioned characteristics were evident in the 17 sets played on the court at State last weekend, but it is bigger than that. It's the standard set for excellence at the highest level on the playing court.

In the final-four match up featuring the Haxtun Lady Bull...