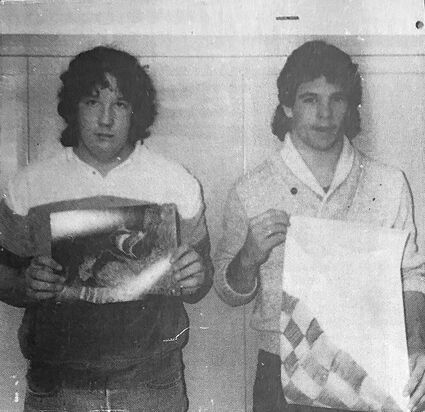 The Future Farmers Club of Haxtun received singular honors from the state organization this month by being credited with the best idea of the month, as published in the Colorado Future Farmer publication. An ear-of-corn contest was held and a prize given for the best ear submitted. This specimen will be shellacked and mounted on a board painted in the official colors of the Future Farmers. The special ear will be used in the opening and closing ceremonies of the Haxtun chapter in the future.

A radio bulletin Wednesday night said that King Edward VIII of Great Britain had abdicated the throne with the intention of marrying Mrs. Wallis Simpson, American divorcee. It was reported that abdication papers had been signed by the monarch and would be delivered to the House of Commons Thursday. The government, opposed to the marriage, asked King Edward to choose between the throne and Mrs. Simpson.

Friends of Miss Lois Hart, formerly of Haxtun, will be interested to learn of her marriage on Thursday, Nov. 12, to Mr. Max Boyd of Denver. The wedding took place at the M.E. Trinity Church in Denver.

Hospital News - Among recent donations: two blankets from Emil Cronquist, canned fruit and vegetables from Mr. and Mrs. Harry Downs, apples from John Utecht, meat from Oscar Michael, and a lab robe from the Gold Star Club of Amherst.

A cold wave bringing three inches of heavy wet snow descended on the Haxtun country Wednesday night. The snow, driven by a 45-mile wind during mid-morning, drifted and blocked practically all of the roads in the surrounding rural areas.

A new safety plug has been developed that should be of interest to most farmers. The fuse blows out should a short circuit develop in any connected cord. This prevents current from reaching the danger point, instantly cutting off the source of fire.

Department of Health reports infection in Phillips County in November: 46 cases of chicken pox, six cases of influenza, and 25 cases of streptococcal infections. Timothy Clark, son of Mr. and Mrs. Bradford Clark, Haxtun, has been honored for his performance in the Southwestern Company's nationally knows summer marketing program. While in competition with over 6,800 students from all over the United States, Tim earned the company's coveted Top First-Year Dealer award.

Mr. and Mrs. James Wengert are the parents of a baby girl born Dec. 4, 1976, at Logan County Hospital in Sterling. She was given the name Tina Jo.

Fleming News - Mr. and Mrs. B.V. Wheeler have returned home from their Thanksgiving trip to see their daughter and family, Mr. and Mrs. Dean Dion of Wheaton, Ill. They traveled by train.

Roommates at nursing home celebrate two centuries-plus: Cecilia Exstrom came into the world one year to the date after Myrtle Meakins. Both were born on Dec. 10 with Myrtle in 1890 and Cecilia in 1891. Pictured Cecilia visits with son Stuart Exstrom and daughter-in-law Mary Kay on Sunday. The couple traveled from Sacramento, Calif., to help Cecilia celebrate.

Terry Burmester recently was selected as the 3rd Marine Division Marine of the Year. He was awarded the Navy Achievement Medal in recognition of his exemplary performance. He is the son of Herman G. Burmester of Haxtun and is a 1987 graduate of Haxtun High School.

Dear Santa, I have been really good this year. How are you and the Mrs. this year? Are your reindeer ready to pull your sled and are your elves busy making toys? I hope when you stop at my house will you please give me a remote-control car? Love, Brandon Krier

Stuffing by Cassidy Goddard: Put breadcrumbs, butter, eggs, broccoli and sausage in a bowl. Stir it up. Put it flat in a pan. Put it in the oven on three or four degrees. Leave it in there for five minutes. Take it out and let it set for a little bit. Then you eat it!

Turkey by Mason Bornhoft: Get the turkey in the forest. Bring it home and cut it. Cook it in the oven on eight degrees for 10 minutes. Take it out of the oven and get a plate. The cooker serves it.

Turkey by Grant Statz: First shoot the turkey. Rip the feathers off. Bake it in a pan in the oven on 20 degrees for 60 hours. Let it cool off then you boil it on the stove. Then you eat it!