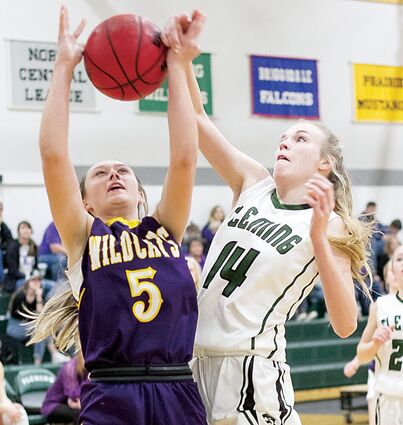 FLEMING JUNIOR Kally Kirkwood goes up hard on defense against Kit Carson's Lindsey Mayhan on Saturday night at Fleming. Kirkwood led the Lady Wildcats in rebounds for the night with six total.

The Lady Wildcats opened the 2022 portion of the season at Merino last Friday night where they cruised to a 54-37 victory over the Lady Rams.

Sophomore Madi Serrato contributed 24 point for the Lady Wildcat offense. She shot 90 percent in field goals for the night after making three of four outside the three-point arc and shooting 100 percent in two-point buckets for 12 points. Her remaining three came at the charity stripe.

Junior Kally Kirkwood brought down eight rebounds - the team high. She grabbed four under Fleming's net and four under Merino's and matched Chintala's assists with three.

The following night, the local Lady Wildcats hosted the Lady Wildcats from Kit Carson. The visiting Lady Wildcats jumped to a five-point first quarter lead, 10-5, but the home team upped the ante in the second to take the lead before halftime. Fleming tacked on 19 points in the second period and held Kit Carson to nine to put them up by five at intermission.

Third quarter score of 13, Kit Carson, and eight, Fleming, made for a 32-all tie ball game heading into the final minutes of play.

Fleming's offense bested Kit Carson in the fourth by five points to hold out for a 45-40 victory to maintain their perfect season record.

Chintala led on the scoreboard for the night with 21 points. She earned nine on three-point shots, 10 in two-pointers and a pair from the free-throw line. She was also a leading contributor in rebounds with three offensive and two defensive for five total.

Serrato shot 86 percent from the free-throw line for six points and added another six off two-point buckets to follow Chintala with 12 points.

Kirkwood led under the net with six rebounds - split at two offensive and four defensive.

The 6-2 Lone Star Lady Longhors and the 4-1 Stratton Lady Eagles make up this week's schedule. Lone Star comes to Fleming on Thursday for 4 p.m. contests. Friday night puts Fleming on the road for 4 p.m. games at Stratton.