Wildcats return from break to gain a pair 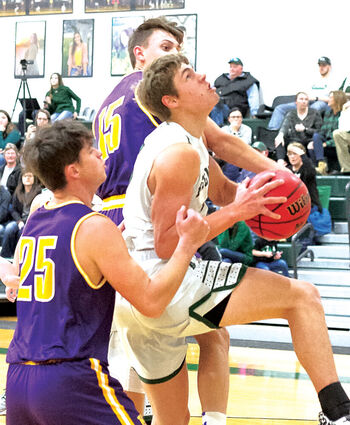 HARRY HARMS, Fleming Wildcat junior, fights under the net to put up a shot in the Wildcats' contest against Kit Carson on Saturday night. Harms led his team boards for two consecutive nights. He earned a double-double on Friday with 12 rebounds and 10 points on the road against Merino and brought down eight rebounds on Saturday at home against Kit Carson.

A two-weekend holiday hiatus gave the Fleming Wildcats some much needed momentum to bounce back from the 1-4 record that opened their 2021-22 season. The Wildcats returned to the court last weekend to pick up a pair of wins over Merino and Kit Carson to advance to 3-4 overall.

The 2022 portion of the season opened at Merino on Friday night, Jan. 7, where the Wildcats faced off with the then 3-2 Rams. Fleming jumped to an early eight-point lead, but fell behind in the second and trailed by four at the half.

The Wildcats stepped up in the third to take a two-point lead over the home team...