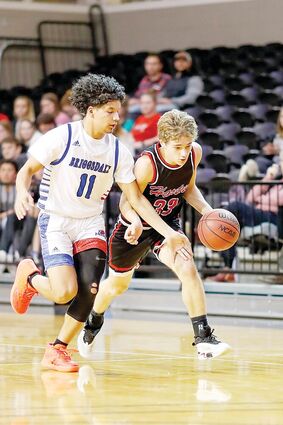 MICHAEL GERK, Haxtun ball carrier #33, drives up the court in a match up with Briggsdale in Sterling at Northeastern Junior College. Haxtun took the five-point win over the Falcons last week.

Haxtun handed the top-ranked Briggsdale Falcons their first loss of the season in a stellar performance at Northeastern Junior College last week.

The Bulldogs knocked off Briggsdale in a close, five-point contest that later bumped Haxtun up five spots in Colorado 1A rankings. Haxtun went from a 10th place ranking the week before to the fifth place seed this week with just four games remaining on the regular season schedule.

The Bulldogs gained an early lead, outscoring the Falcons by five in the opening quarter of the contest. Briggsdale narrowed in on the gap by four in the second t...