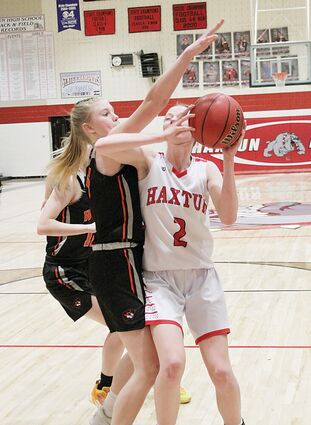 The Lady Bulldogs ended the regular season with two hugs wins, both on their home court last week. Haxtun took down Wiggins in a double-overtime thriller Thursday night and the next, earned a five-point win over 1A foe Lone Star. The victories give the Lady Bulldogs an 8-11 overall record as they head into post-season action.

Haxtun found themselves down by seven at the end of the first quarter against Wiggins at home Thursday night. The Lady Bulldogs added 18 points in the second quarter while holding the Lady Tigers to just 12 to bring the game within one at the half way mark. Haxtun's defense came out strong after the halftime break, holding Wiggins to only four points in the third quarter to gain a second half advantage. It was back and forth throughout the fourth as the final buzzer sounded with a score of 48 all; sending the contest into overtime.

The Lady Bulldogs gave their fans an impressive showing as they went on to tie the game at the end of the first overtime to send it into a second. Haxtun came out with 18 points in the extra eight minutes of play while holding the Lady Tigers to just 14 for a 66-62 much needed league win.

Three Lady Bulldogs led with double-digits in the scoring department including 18 points from senior Taylor Schram, 14 from freshman Bobbi Starkebaum and 13 off the hands of sophomore Cassidy Goddard.

Haxtun shot 43 percent from the free throw line lead by Schram who went 100 percent on the night. Goddard, Emily Anderson and Allie Thompson all went 50 percent at the line.

Starkebaum pulled down 14 rebounds for a double-double against Wiggins. Thompson brought down 10 followed by Schram with eight and Goddard with seven.

The following night, Haxtun took the court in a match up with Lone Star. The Lady Longhorns entered the contest with a recent win over Flatirons Academy, the second ranked team in 1A. Haxtun battled in their final home court contest this season following parent recognition and a special honoring of senior athletes for a 42-37 win over the Lady Longhorns.

Bornhoft registered 12 points in the contest against Lone Star, the team high. Others added double-digits including Schram with 11 points and Starkebaum with 10.

As a team, Haxtun shot 63 percent from the charity stripe against Lone Star. Bornhoft sunk seven of 10 shots for 70 percent, the team's best.

A host of Lady Bulldogs pulled down six rebounds in the contest including Thompson, Bornhoft, Schram and Starkebaum. Goddard brought down five.

Thompson and Bornhoft registered four assists while Schram tallied six steals on the opposite side of the ball. 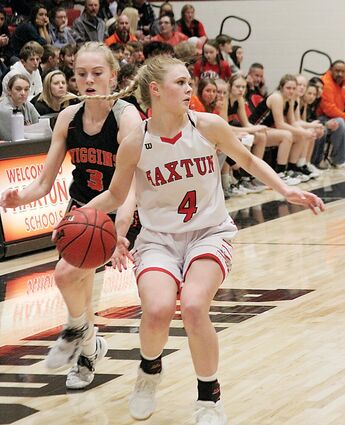 "These were two big wins for our team. We have worked to be playing our best basketball at this point of the season and I believe we did that in these two games" Head Coach Arlan Scholl said. "In these hard fought battles, the girls just kept fighting and finally came out on top. Both games were great team efforts and I am very pleased with how we are progressing at this point as a team."

The Lady Bulldogs entered the District 4 post-season bracket with a fourth place seed. The team was set to face off with Caliche for the third time this season on Tuesday afternoon at Northeastern Junior College in Sterling. Haxtun came out on top in the first two meetings of the season, 55-47 in the first and 59-48 in the second.

Should the Lady Bulldogs take a third win over the Lady Buffs this season, they will advance to face Briggsdale on Feb. 24 at 4 p.m., also at NJC.

The winner of that contest will advance to the Championship contest at NJC on Saturday afternoon. For a full District 4 bracket, see inside this week's edition of the Herald.