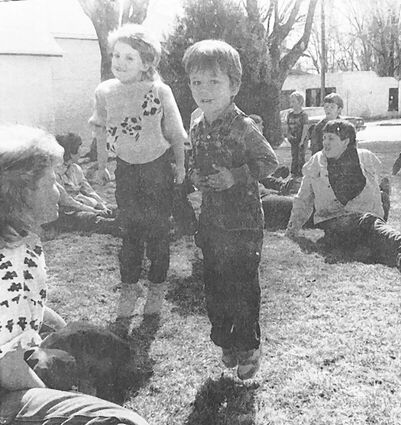 AS THE CROWD looks on, Abby Ensminger, left, and Michael McBee hop as fast as they can for Muscular Dystrophy. The Busy Hands preschoolers hopped a total of 4,971 Tuesday, March 30.

Funeral services were held last Saturday morning for Mrs. R.T. Fisher, who passed away Thursday at her home in Haxtun. She was 61 years, six months and 28 days old. She was the mother of 10 children, two having preceded her in death.

It was learned this week that the election to decide the question of voting bonds for a new high school gymnasium at Haxtun will be in a special election in the latter part of May.

Glenn J. Jones, secretary of the Haxtun grade school board, was recently appointed to the Phillips county high school commi...